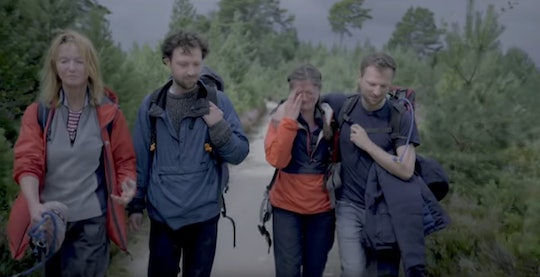 There are plenty of enthralling documentaries on Netflix, and many of them offer intriguing insight on subjects you may not be familiar with. But the streamer’s latest offering, Evelyn, tackles serious issues that almost everyone can relate to, and it does so in a very genuine and authentic way. If you’ve seen a preview while scrolling through your Netflix catalog, you may be wondering exactly what Evelyn is about.

The film comes from Academy Award-winning director Orlando von Einsiedel, who you may remember from his powerful documentary short, The White Helmets. But rather than pursue objective subject matter, Von Einsiedel turns the lens on himself in Evelyn, and unveils the hurt and pain he faced with his family after the loss of his younger brother, Evelyn.

The documentary follows Von Einsiedel and his family as they trek the UK 14 years after his brother’s suicide, and take the opportunity to remember him. “This poetic feature documentary explores the fabric of grief and the longevity of love,” read the movie’s website. “Part quest film, part road-trip, part memoir, Evelyn is an exposition of the taboos of mental health and male emotion, and a tribute to our times.”

At the beginning of the film, Von Einsiedel confesses that despite filming in some of the world’s most dangerous war zones, the one thing that makes him the most uncomfortable is recalling his brother’s death. “I can’t bring myself to talk about what happened to my brother and how he died,” the filmmaker says in the documentary. “I mean, I can barely say his name. You know, apart from conversations where it’s almost been forced on me, I don’t talk about him at all, neither do my brother and sister, Gwennie and Robin — And we’ve decided to try and face the things we just couldn’t on a five-week walk in places that we spent time together with him. Along the way, our family and his best friends are going to join us.”

In an interview with Seventh Row, Von Einsiedel said he made the film in an effort to get himself and his family to finally face the pain of their loss, and share their feelings with one another. But he also admitted he hoped the movie would inspire viewers to get help for themselves or their loved ones if needed. “At a deeper level, we really hope that the film is a catalyst for people to reach out to somebody whom they think might not be well,” he told the outlet. “When it comes to things like suicide and mental illness, I think you can often feel like it’s only doctors who can help somebody. But actually, a phone call at the right moment can completely stop someone who’s on a downward spiral. It won’t solve the problem, but it can stop somebody from taking their life.”

He also said he hoped the film could help enlighten the conversation about mental illness, and make it easier for people to talk about. “Mental illness is so stigmatised,” explained Von Einsiedel. "It’s so hard to talk about it because it’s taboo. It’s considered embarrassing. It’s difficult, and we hope that the film can help destigmatize things — It’s about talking about these issues, and when people do talk about these issues, the less of a stigma it becomes.”

Evelyn is no ordinary documentary. It offers an authentic, emotionally introspective look into the pain and loss of suicide, and exposes the crucial need for society to begin talking about mental illness in a healthy, productive way.

Evelyn is currently streaming on Netflix.