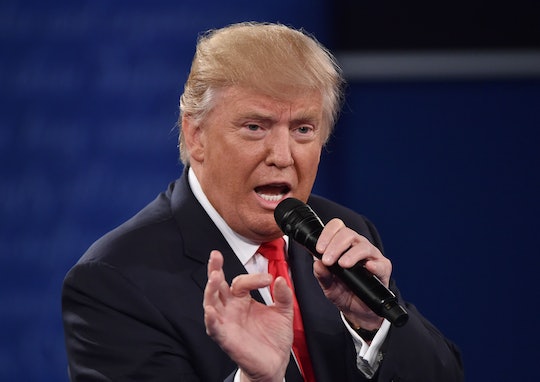 During the second presidential debate on Sunday night, Donald Trump's "extreme vetting" plan came up once again. The plan, first unveiled in August, purports to screen Islamic extremists out of the immigration process, and involves questioning immigrants on their religious, political, and social ideals. According to CNN, the policy would assess "whether applicants' beliefs match U.S. values on gay rights, gender equality and religious freedoms, among others." It's a curious plan, given that U.S. citizens themselves are deeply divided on these same issues. In fact, the Republican party's platform is in direct opposition to federal law on some of them. Would members of Trump's own party pass the extreme vetting test?

Trump's immigration plan also calls for the U.S. to "temporarily suspend immigration from regions that export terrorism," which is a vague way to phrase things, since there is no one country or region that "exports" terror; in fact, every terror attack on U.S. soil since September 11 was carried out by either a U.S. citizen or a legal permanent resident. Similarly, the suspects in the Paris attacks were French, Belgian, and Moroccan. Is Trump advocating for a ban on Belgians? Trump's immigration plan seems less about national security and more about xenophobia.

We don't exactly know nothing about Syrian refugees, however. We know that nearly 5 million of them have fled their homeland out of fear for their own safety since a brutal civil war broke out five years ago. We know that ISIS then took advantage of the country's upheaval, causing an already war-torn country to become even more dangerous. And we know that nearly half of those refugees are children. They're not terrorists; they're running from terrorists. Would Trump block those innocent kids fleeing bombed-out apartment buildings simply because their parents raised them in a religion that he doesn't agree with? Is Islamophobia really more important to the United States than keeping innocent people safe? "Extreme" is exactly the right word for a plan like this.