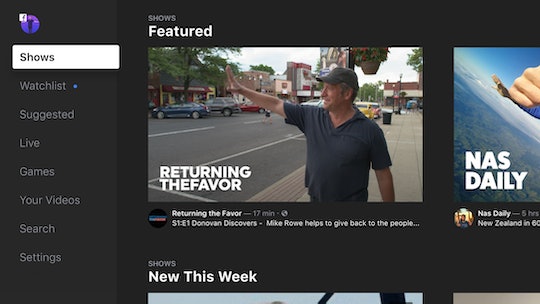 On Wednesday, Facebook announced a major new addition to its social media offerings via its company blog. What is Facebook Watch? No, it's not the latest wearable tech device — but it is a huge new platform for original videos on Facebook. Your News Feed is about to get a whole lot more awesome as new shows debut on Facebook Watch by offering users an even broader plethora of original video content within the Facebook platform itself.

In addition to launching its own video platform, Facebook announced several original shows, such as Nas Daily, Gabby Bernstein, and Kitchen Little by Tastemade, where kids will watch recipe how-to videos and try to recreate the recipes on their own. Well doesn't that sound adorable? Sports fans can also rejoice: Major League Baseball will live stream games via Facebook Watch, with one live game per week.

Perhaps one of the coolest features of Facebook Watch is the sense of community the company aims to bring around to each of its original shows. And it is using the term "show" pretty broadly, as shows will be comprised of both live and recorded episodes centered on a theme or storyline, according to the company's blog. Additionally, viewers can connect with each other in real time while watching shows, as Daniel Danker, Facebook's Director of Product said in the announcement: "You can see comments and connect with friends and other viewers while watching, or participate in a dedicated Facebook Group for the show." Neat-o.

It's perhaps the biggest gauntlet throw down at the feet of online video behemoth YouTube. It's a bold strategy for Facebook to take on YouTube, as it promises many of the same benefits that have attracted original video content creation over at YouTube: audience and community building, exposure, and perhaps most importantly, that sweet sweet cash.

But now, onto the really important question: How do you get Facebook Watch? Facebook Watch will be available as its own tab via Facebook's mobile, desktop, laptop, and TV apps, but if you don't have it right away, don't sweat it. TechCrunch reports it's being rolled out to small groups of users starting Thursday. Given the significance of its investment — there are more than two dozen content partners already working with Facebook, according to Variety — Facebook Watch is definitely meant for the masses.

So what does this all mean for the average Facebook user? We're going to have a lot more shows we can watch as we wait in that seemingly endless lull between the Game of Thrones season finale this summer and when Westworld comes back next year.