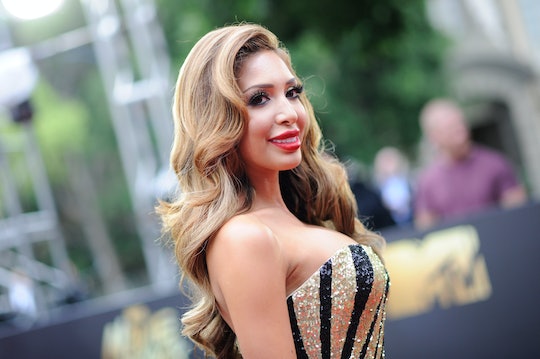 What Is Farrah Abraham's Net Worth? She's Done Well For Herself Despite Many Battles

Even though she's 25 years old, reality star Farrah Abraham, she will always be an MTV Teen Mom — and she's come a long way. When Abraham was first cast as one of the original subjects of the MTV reality show, 16 & Pregnant, her life circumstances seemed pretty dire at the time in 2009: Her boyfriend and father of her child, Derek Underwood, was killed in a car accident just one month before their daughter was born. The following year, Abraham's mother was arrested for assaulting her. Since then, Abraham has starred in six seasons of Teen Mom, has authored a book, released an album, and even has her own line of pasta sauce. So, what is Farrah Abraham's net worth? According to CelebrityNetWorth.com, Farrah Abraham's net worth is $1 million. For a 25-year-old, she's not doing half bad.

And yet, despite Abraham's apparent financial success, it hasn't been without some serious challenges and struggles. She told In Touch that releasing her 2014 sex tape, Back Door Teen Mom, had ruined her life. Even now, Abraham is back in the news: the Real Mr. Housewife blog revealed that allegedly, Abraham and Amber Portwood got into a fight on the set of the Teen Mom OG reunion show taped this past weekend. Though MTV did not immediately respond to Romper's request for comment, Abraham's boyfriend, Simon Saran, had plenty to say about the whole thing on Twitter.

So what happened? First, let's lay out the cast of characters: There's Farrah Abraham and her boyfriend Simon Saran. Then there's Amber Portwood, another cast member on Teen Mom OG, and her boyfriend Matt Baier. According to Real Mr. Housewife blog, an unnamed source who was at the taping said the fight happened after the Teen Mom OG reunion show host, Dr. Drew, brought up comments that Saran had made about Baier. The source continued:

When Dr. Drew mentioned Simon had called Matt a pedophile, it seemed like he was heading in the direction of an apology, claiming it was all in fun. However, Farrah piped in and said well he does kind of look like a pedophile.

From there, the situation allegedly turned physical: Portwood, Baier, and Abraham's father Michael stormed up on stage, where Portwood tried to punch Abraham. Security had to break up the entire mess. Portwood took to Twitter to respond to Saran:

Meanwhile, Abraham's only comment on the situation was a retweet of the the Real Mr. Housewife blog post. It seems like Farrah Abraham has been through one fight after another in her life, from being a teen mom to the death of her daughter's father, to allegations of abuse from her parents, some years in the adult entertainment industry that she says didn't work out for her, and now this latest row. Money definitely only makes life easier to a certain extent.