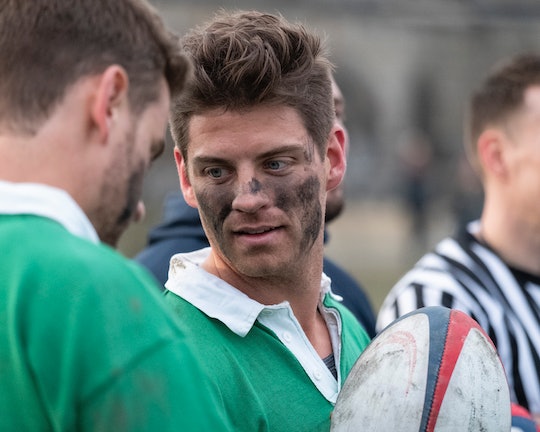 Some Bachelorette contestants are strong right out of the gate and some take a little time to warm up. Hannah B's Garrett, for example, seems to have suddenly emerged from the pack as a serious contender for her heart. And that means it is time to deep dive into Garrett's social media accounts to learn more. And if you check out Garrett's Instagram outside of The Bachelorette, you'll find a fun-loving guy with some super close personal relationships.

You can easily find Garrett on ~the gram~ with the username rgarrettp. I'm guessing the "R" stands for "Real Garrett Powell," "Rockin' Garrett Powell," or "Ready (to get engaged to Hannah) Garrett Powell." As a pro-golfer from Birmingham, Alabama — about an hour from Hannah's hometown of Tuscaloosa — his Insta page is chock full of shots of Garrett doing his golf thing. There are also a lot of snaps where he's with family and friends, enjoying a baseball game and a drink, and posing with the rest of the Bachelorette guys. If you scroll long enough, you'll also find he's a game hunter (which may or may not appeal to Hannah), goes to a lot of weddings, and may or may not be a great dancer. Regardless, it looks like he's having fun in everything he does.

Seeing as Garrett is a big supporter of his alma mater, Mississippi State University, just as Hannah is of her Alabama roots, I can totally see Hannah making future appearances on Garrett's Instagram feed. The quarterback-turned-pro-golfer is among the most underrated contestants this season in my opinion. He's not a drama starter, seems well-liked, and gives the impression of a genuine desire to be there for Hannah. He didn't even sign up for the show — his sister-in-law did it for him — so he's definitely not there to promote something, gain a social media presence, boost his career, or become an influencer (that I can tell anyway). Plus the two have a lot in common and that has to count for something.

It's hard not to judge someone based on their social media presence these days, but it never tells the whole story. In Garrett's Instagram case, he has a brother and sister, both married, and seemingly supportive group of family and friends he likes to hang out with. These are all things Hannah, or any woman, might see as positives — especially when there are already unlikable guys in the Bachelor mansion (you know I'm talking about Luke P.). Garrett is there to find love, guys. Nothing else.

Having said all of this, there's more to Garrett than his Instagram shows. He carries himself in a way that's easygoing and likable, even the way he's edited for TV. With all he and Alabama Hannah have in common, it'd be a shame for him to go hime anytime soon.

There's still plenty of time for Garrett to tee up and win Hannah's heart (does that golf metaphor work?). So if you're hashtag Team Garrett don't count him out just yet.