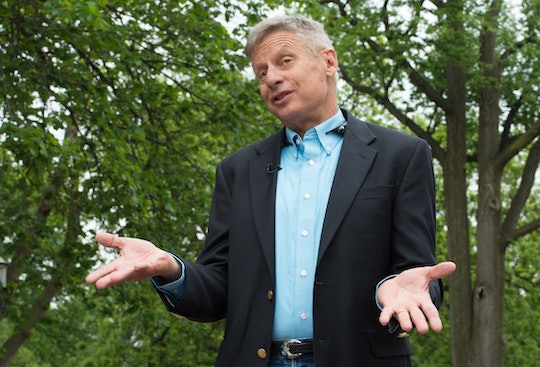 What Is Gary Johnson's Net Worth? He Apparently Has A Lot In The Bank

You may not have heard of Gary Johnson, but the libertarian millionaire could rock the ballot this November. The 63-year-old who grew a one-man construction company into a multi-million dollar corporation of 1,000 employees, is now the second millionaire running for president. So what is Gary Johnson's actual net worth?

Johnson's personal net worth was estimated between $3 million and $10 million, as of 2011.While that pales next to Donald Trump's estimated $4.5 billion, comparisons between the two are significant. While Johnson is still polling below 10 percent, his candidacy matters, if only because he could steal important votes from Hillary Clinton or Donald Trump.

Unlike Trump, Johnson made his own fortune. What began as a small construction company ballooned into one of New Mexico's largest corporations. In 1994, shortly before selling his company, he decided to get into politics, running as a Republican for governor of New Mexico and using $400,000 of his own money to fund his campaign.

Johnson's low tax and anti-crime platform won him the race. He cut the annual budget growth by 10 percent, using over 600 gubernatorial vetoes in his first 6 months. During his eight years as governor, he vetoed more bills than all other governors combined, a fact not lost on fiscally conservative Republicans who may be inspired by Trump's financial success but who don't identify with his bombastic rhetoric.

But Johnson's views on gay marriage and abortion may alienate religious voters and appeal to Democrats who don't feel inspired by Hillary Clinton. Johnson strongly believes that abortion is a woman's right and is pro-gay marriage.

Liberatarian candidacies normally don't make a dent in the general election. But as with everything, that too is different in this year's election. With likability ratings for the Democratic and Republican nominees are at an all time low, Johnson may have an opening.

It's no surprise Johnson has Trump worried. In a recent interview on Fox, Trump refused to say Johnson's name. "I don't want to mention the name. We want to give them as little publicity as possible, but I don't think they'll have that much of an impact," Trump said.

Johnson has also caught the eye of Sanders supporters, 18 percent of whom say they plan to vote for him in November.

One thing is for sure, whether you vote for him or not, Johnson is one candidate to keep your eye on this election season.