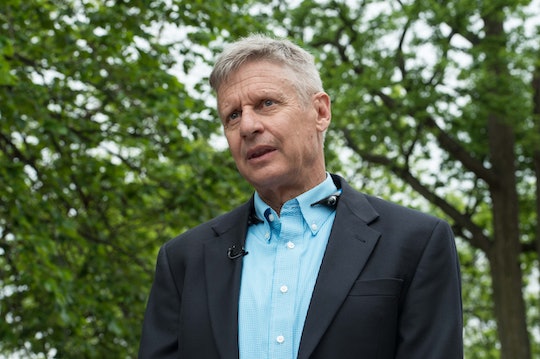 What Is Gary Johnson’s Stance On Women's Issues? The Libertarian Candidate Is A Tough Read

Conservative voters looking for an alternative to presumptive Republican nominee Donald Trump have granted a rare opening to a third party presidential candidate: Libertarian nominee Gary Johnson. And while his candidacy may still be a bit of a long shot, Johnson could prove to be an important entity in the upcoming elections, forcing the mainstream candidates to clarify their own positions on everything from taxes to the environment. But, with much of his platform focusing on budgeting and taxation, Gary Johnson’s stance on women’s issues has been more difficult to discern.

To be clear, it’s not all that rare to have a third party candidate for president — wild card candidates Ross Perot and Ralph Nader spring immediately to mind — but what is unusual is how quickly Johnson is gaining support. In what has largely been a race between two widely known (and starkly contrasting) personalities, Johnson is gaining traction. The Washington Post recently cited a poll of Utah voters that placed Johnson at 13 percent compared to 35 percent for both Hillary Clinton and Donald Trump. That’s no small accomplishment, considering Johnson, who was the Republican governor of New Mexico from 1994 to 2003, was relatively unknown at the national level just weeks ago.

But with voter’s facing the possibility of electing the nation’s first female president, where Johnson stands on issues important to female voters will be crucial in the coming months. With Clinton unveiling proposals on everything from mandating paid family leave to eliminating in-state college tuition for low- to middle-income families, women's and family issues are sure to be a major talking point heading into the election season. But while Johnson has been forthcoming about issues like tax reform, immigration, and criminal justice, the Libertarian candidate’s proposals related to families and children are a bit less clear.

Here are some examples.

Back in 2011, Rep. Michele Bachman and former Sen. Rick Santorum were among the prominent Republicans pushing a so-called “marriage vow” — essentially a commitment to uphold a laundry list of socially conservative ideals on everything from same-sex marriage to pornography. Politico reported at the time that signing the pledge affirmed commitment to “protecting women and children” from “promiscuity, and all forms of pornography and prostitution, infanticide, abortion and other types of coercion or stolen innocence.”

Johnson was one of a handful of Republicans who refused to sign the pledge, according to the Huffington Post. According to that report, at the time, Johnson called the pledge “offensive,” an “[attempt] to prevent and eliminate personal freedom,” and the “type of rhetoric” that “[gave] Republicans a bad name.”

On Education Options For Children

According to his official website, when it comes to the federal role in education policy, Johnson’s position is pretty clear cut: there shouldn’t be one. Citing his role in promoting a school choice agenda as New Mexico’s governor, Johnson’s presidential platform includes plans to “eliminate the federal Department of Education and return control to the state and local levels.” According to that website, he opposes “attempts to impose national standards and requirements on local schools,” including Common Core.

So, a Johnson presidency could mean the end to national education standards, but it’s unclear whether ending those standards would also mean ending federal mandates on school quality, nutrition, and access that bolster public school systems.

Given Johnson’s position on government size and personal freedom, it’s probably not surprising that the nominee has put forth a decidedly pro-choice stance when it comes to abortion rights. According to his campaign website, while Johnson is personally pro-life, when it comes to governing he believes that “each woman must be allowed to make decisions about her own health and well-being and that these decisions should not be dictated by the government.”

Johnson’s platform languages called access to safe abortion services “the law of the land,” saying that the law was “to be respected.” So, while the language is silent on Johnson's plans for the higher court, it seems unlikely that he, as President, would seek to change that law by appointing socially-conservative federal court judges.

So far, Johnson has followed the small-government, limited-interventionist tenets of the Libertarian party pretty closely. But as the race for the White House heats up, he’ll certainly come under pressure from his fellow candidates — and from voters — to clarify how those principles would translate into his policy proposals. Whether Johnson’s position on issues that affect women and families will be attractive enough to lure voters away from Clinton or Trump might be the real wild card heading into November.