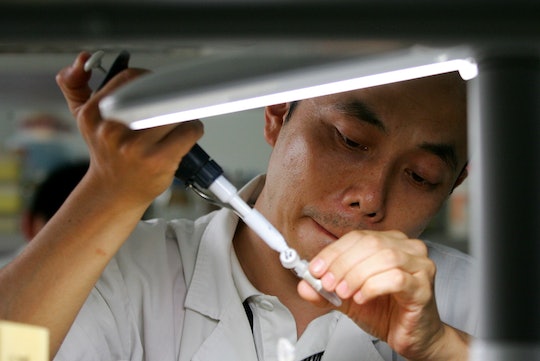 Here's What Gene Editing Could Mean For Parents

Without contact lenses or glasses correcting my vision, I have myopia so strong that my range of clarity is limited to several inches in front of my face. If I ever choose to have kids, I'd probably be passing those four-eyed genes on to my offspring. Luckily for me and my potential children, though, myopia isn't too big a deal, and it's easily corrigible. For those with serious diseases or disabilities, however, having children can be a scary gamble — and the idea of gene editing can sound quite appealing. But what is gene editing, anyway, and what will it mean for parents if it ever becomes available?

Gene editing — which is still not a reality for parents out there — is the process of genetically modifying embryos, eggs, or sperm in order to fix genes that cause severe disease or disability. While one can only hope that this technology will also help the near-sighted folks out there one day, the obvious priority in gene editing research is what scientists call "heritable germline editing." Germline editing is a procedure that would correct the genes involved in serious, genetic diseases, such as cystic fibrosis, Huntington's disease, or familial amyotrophic lateral sclerosis (also known as ALS or Lou Gehrig's disease). If successful, individuals whose genes carry scary diseases could have children without worrying whether they would be passing on a lifelong struggle.

At the moment, gene editing may sound like something straight out of the pages of a science-fiction novel, but the world is actually slowly inching closer to seeing gene editing become a reality. On Tuesday, the U.S. National Academy of Sciences released a 200-page report detailing guidelines around gene editing, since research in the field has been growing in leaps and bounds in recent years. The group of 20-plus scientists and ethicists behind the report recommended limiting the technology's use to "treatment or prevention of diseases or disability," according to Bloomberg — but they have cautiously endorsed the use of gene editing in the future.

In fact, humans have already undergone gene editing treatment, according to Popular Science. In China, a human patient was treated with the promising CRISPR gene-editing technique in November, with researchers switching off a gene in an attempt to treat his lung cancer. The man was one of 10 patients undergoing the clinical trial. All patients were unresponsive to traditional treatments, and were expected to have less than six months left to live. Unfortunately, the Chinese clinical trial's results aren't yet available.

The fact that a clinical trial using CRISPR has already been carried out is promising, but it will likely be a while before parents are able to use gene editing to switch off genetic diseases for future generations. "There is an enormous amount of research that has to go into this, and then the question is what are the conditions where you’d even consider it, and those are very tightly defined," Rudolf Jaenisch, a professor of biology at MIT and a member of the team behind the National Academy of Science's report, told The Guardian. "It would be conditions where no other options exist to have a healthy baby."

Currently, the Food and Drug Administration doesn't allow applications for germline therapy clinical trials, according to The Guardian. That restriction, however, is up in April — and with this new, cautious approval from the U.S. National Academy of Sciences, Americans might just be looking at a future where gene editing could help children lead healthier lives.