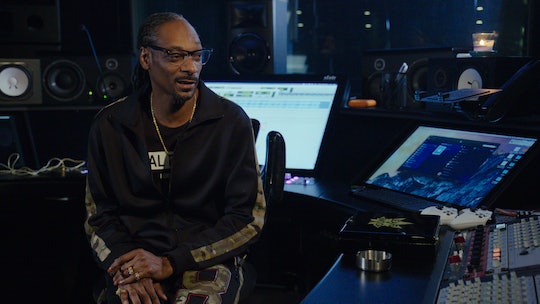 'Grass Is Greener' Is A Snoop-Approved Cannabis Documentary

Hip hop pioneer Fab 5 Freddy, née Fred Brathwaite, is making his directorial debut with the help of Snoop Dog, members of Cypress Hill, and Bob Marley's youngest son Damien, set to release on the thematically appropriate Apr. 20. For viewers wondering what Netflix's Grass Is Greener is about, it's a racial justice documentary in the vein of Ava Duvernay's 13th, except instead of focusing on America's racist history of incarceration, Grass is Greener zeroes in on the xenophobic roots of American marijuana criminalization.

According to the Netflix synopsis, the film unpacks "the plant’s influence on music and popular culture, and the devastating impact its criminalization has had on black and Latino communities." It does this by tracing the government's early demonization of marijuana using xenophobia as its weapon. The trailer even shows a clip of mid-century news footage calling marijuana "a Mexican weed smoked in cigarette form called reefers, a one-way ticket to the nuthouse." The 1950s were a paragon of scientific accuracy!

The trailer then cuts to footage of the Black Panthers, and a voiceover explains, "This is where drugs becomes a proxy to race. Because you could no longer legally write race into the law, [but] you could write drugs into the law."

Everything up to and including the United States government's use of the term "marijuana" instead of cannabis to talk about the substance was intended to stoke xenophobic fears. Some argue that, due to the word's racist and intentionally stigmatizing roots, we should abandon the term "marijuana" — a distinctly American practice — in favor of calling it cannabis along with the rest of the world. Others, however, argue that we should keep calling it marijuana precisely because of those racist roots, to remind us of the way in which the government capitalized on the nation's racism to persecute people of color in a "socially acceptable" way.

Of course, it's been well-documented that cannabis is used at roughly the same rates amongst different racial demographics, but non-white users are statistically far more likely to wind up facing criminal charges over it. And as cannabis legalization is embraced in the United States while people remain incarcerated for low-level marijuana crimes, our history with it becomes even more complicated.

The documentary, narrated by Freddy, includes interviews with Snoop Dogg, Cypress Hill’s B-Real and Sen Dog, DMC, Doug E. Fresh, Chuck D, Damian Marley, and Killer Mike, as well as other experts on everything from the legal system to the medical field.

Said Freddy in a press release, according to Billboard:

My hope, as I light one up on 4/20, is that this film will entertain, educate, and enlighten people across the country and around the world about the rise of marijuana, the racially motivated reasons behind its initial criminalization, and the economic ramifications that continue to affect entire races of people.

Grass Is Greener will also screen at the San Francisco International Film Festival on the same day as its Netflix release, according to Deadline. It may have a gimmicky release date, but it's clear that the doc intends to take a hard look at the lasting impact of the War on Drugs.