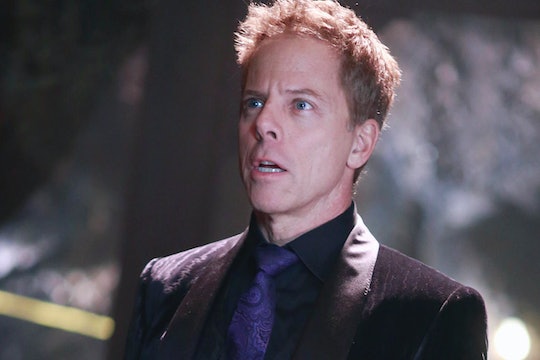 What Is Hades Hiding On 'Once Upon A Time’? A Wicked Love Interest, It Seems

Once Upon A Time fans are finally learning a little more about the King of the Underworld. In this week's episode, which mainly focussed on the tumultuous (and hella hot) relationship between Hook and his brother Liam, viewers got a glimpse into Hades. And, as with any character on Once Upon A Time, it's a life full of secrets. But exactly what is Hades hiding on Once Upon A Time. Well friends, it's something very, very wicked indeed.

OK, the wicked part shouldn't be a total shock. After all, Hades is the most villainous god in Greek mythology. But what is a surprise is that Hades's secret involves an equally wicked, slightly greener character. Yes Once Upon A Time fans. I'm talking about Zelena.

Fans knew Zelena would be back at some point to unleash hell on the Storybrooke crew. After all, she tried to put an end to Outlaw Queen (i.e. Robin and Regina) at the beginning on the season. Only this time, she's back as a love interest rather than a hated half-sister. (OK, yes, we still hate her.)

But let's back up a second. This episode centered around the Hook and Liam, or The Brothers Jones, and what happened in their past that put Liam in this purgatory. It turns out, Liam made a deal with Hades back in the day that killed many men, but made him a hero in the process. Especially to his younger brother Hook. In order to keep the secret from Hook, Hades orders Liam to steal his pages from the Underworld's version of the infamous book. At the end of the episode, the stolen pages trickle down to Hades, revealing a photo of him and Miss Green herself, Zelena.

I know, right? Who would have thought the blue-haired king and green-skinned witch would have a connection other than their evil nature. But wait folks, because it gets better. Though Hades assures the photo that the duos secret remains just that, previews to next week's episode indicate that the two had quite the heated romance (no pun intended.)

In the previews, it seems Hades and Zelena bonded over the fact that no one likes them. For Hades, however, that mutual respect seems to turn into admiration and — dare we say — love. But based on Zelena's fear to reveal their relationship to Regina, Robin, and the others, it would appear that things didn't end well for the evil duo.

It looks like there's a lot to uncover in next week's episode. And I for one can't wait.