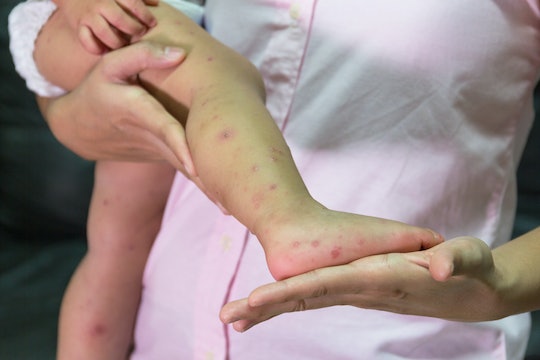 Hand Foot Mouth Disease Isn't Always As Bad As It Sounds, But It Can Be *Rough*

For those who've never had hand foot mouth disease (HFMD), it probably sounds like something cows get. That's actually hoof-and-mouth disease, an entirely different beast. But HFMD affects humans — usually young children — and it's especially prevalent this time of year. I can speak from firsthand experience since my 18-month-old just had it. So if you're wondering what is hand foot mouth disease, I'm about to get into all the icky details. My household survived HFMD and yours can too!

HFMD is a common contagious illness caused by the coxsackievirus, and in fact, your pediatrician will probably refer to it as coxsackie if you take your child in for it. Once infected, your child is likely to first experience a fever and sore throat, followed, a couple days later, by blister-like sores on the hands, feet and, most painfully, on the inside of the mouth, according to Healthline. You can see where HFMD gets its name. Yet, while the telltale symptoms of the virus appear on those areas, your child might also develop a rash on his or her elbows, buttocks or knees, according to WebMD.

My daughter's initial symptoms were a high fever (100 degrees) along with a bout of vomiting. Nausea, diarrhea, and vomiting, can be additional symptom of the virus, according to Self, and in fact may be the first signs that the virus is present.

However, just to make things even more complicated, some people can have HFMD and hardly know it. "Not everyone will get all of these symptoms. Some people, especially adults, may become infected and show no symptoms at all, but they can still pass the virus to others," explained the Centers for Disease Control (CDC).

While symptoms can range from the mild to the severe, HFMD tends to be a pretty miserable experience. The sores in the mouth make it extremely hard to eat and drink, so mealtimes are rough, and you have to be vigilant about pushing fluids so your kiddo doesn't get dehydrated.

There's no treatment for HFMD, but the CDC recommended using over-the-counter pain medications (just not Aspirin for children) to help manage the pain and reduce fever. Since HFMD lasts about a week to 10 days, it's recommended that you keep your child home, and out of daycare, for as long as they're experiencing symptoms, according to WebMd.

HFMD is most common in children under the age of 10, although adults can get it too, especially if they have weakened immune systems, according to Healthline. The virus is spread by saliva, fecal matter, and respiratory droplets, according to Healthline, so you'll want to be washing your (and your children's) hands even more thoroughly than normal, especially after going to the bathroom or changing a diaper.

It is a lot to take in but take heart, HFMD season doesn't last forever, and peaks at the end of summer and into the fall, said William Schaffner, M.D., an infectious disease specialist and professor at the Vanderbilt University School of Medicine in an interview with Self. "Once the weather gets cold, these kinds of outbreaks fade away, and they don’t crop up in spring or early in the summer except for rare exceptions."

I'm not keen on wishing away summer, but I'll be very relieved when HFMD season is in the rearview mirror.