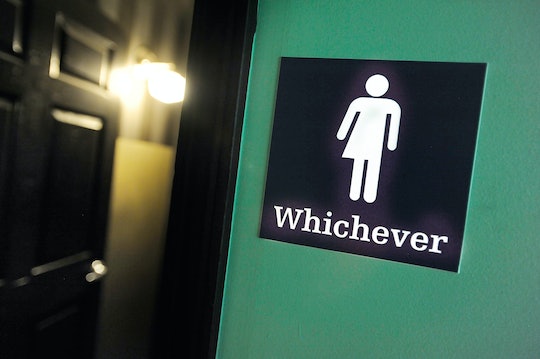 What Is HB 562? North Carolina's New Bill Is Restrictive

Last year, North Carolina faced extreme backlash for the passing of House Bill 2 — an exclusionary bill that among other things, stated that public restrooms are designated for use based on a person's "biological sex" that is stated on their birth certificate. In March, under a new governor, the bill was repealed — but it doesn't mean that bathroom laws are gone for good from the state. Soon, some people might be up in arms and have others asking what is H.B. 562? Although this bill is in its infancy, it could have the same exact consequences as H.B. 2.

To understand H.B. 562 is to understand H.B. 2's repeal. According to The News & Observer, H.B. 2's repeal consists of a compromise — leaving the "regulation of restrooms and locker rooms to the state, and sets a moratorium on local ordinances regulating public accommodations or private employment practices" until the year 2020. But the repeal faced much criticism, because according to The Washington Post, the compromise made prohibits local governments from passing measures to protect LGBT people — a major setback that leaves the LGBT community in North Carolina feeling vulnerable and unprotected. But this repeal and its "progress" might have been useless — a new bill introduced by Republicans in the North Carolina State House and Senate, H.B. 562, could bring back those unnecessary "bathroom laws."

H.B. 562 would not only bring back the "bathroom" clause to the state but it would come with a heftier price — according to Rewire, the new House Bill would make it a "Class 1 misdemeanor to trespass in a multi-occupancy bathroom, shower, or changing facility." In North Carolina, a Class 1 misdemeanor has a maximum penalty of 120 days in jail and and are consisted of crimes like larceny, possession of stolen goods, or damaging property. By this bill's definition, using the bathroom that belongs to one's gender identity or "trespassing in a bathroom" in the state of North Carolina is worth jail time or is just as bad as stealing.

But for now, it could be a while until the bill sees any traction — as it was introduced just earlier in the week. Luckily, North Carolina Gov. Roy Cooper's spokesman, Ford Porter, told Mother Jones that the Governor is not in support of efforts such as H.B. 562 — so it might be unlikely that H.B. 562 could ever become a law in the state. "The Governor is not supportive of efforts such as these as he believes we ought to be working to expand statewide protections for LGBT North Carolinians," Porter told Mother Jones in a statement