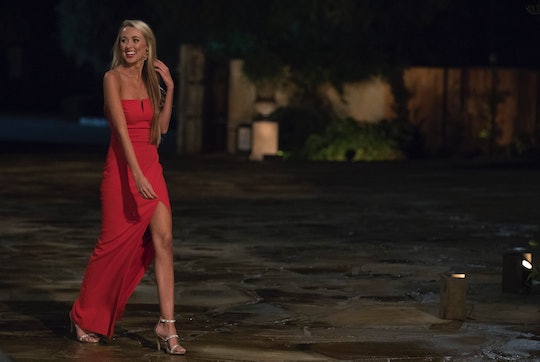 Get To Know Heather Before 'The Bachelor' Season 23

When The Bachelor returns for Season 23 on Jan. 7, Colton Underwood will finally get to meet all of the women vying for his time and attention. Viewers will be introduced to each contestant as well, but they don't have to wait until the three-hour premiere to get a sense of who each woman is. Social media can help with that. For example: what is Heather's Instagram?

Heather Martin is one woman looking for love with Colton. According to her bio on ABC's website, she's a 22-year-old thrill-seeker from Carlsbad, CA. She enjoys anything with an edge of danger, from bungee jumping to skydiving to river-rafting. Her Instagram account, @heatherm22, doesn't offer snapshots of any of these hobbies, however; it contains mostly pictures of Heather with family and friends.

Heather's bio reveals that she has a cat named Kitty, she's not a fan of snakes, and she would be a food critic if she could have any job in the world. She's also never kissed anyone before, which is something that's sure to be brought up throughout the season. Maybe she and Colton can bond over being virgins. Heather did post a screen-shot from the upcoming premiere on Instagram that shows them holding hands.

Much of Heather's Instagram is family fun. She posted a video of her with her siblings and her parents on Christmas working on a song-and-dance routine after receiving karaoke microphones. Her lookalike sisters Shannon and Colie appear regularly in Heather's photos, whether they're at music festivals or just hanging out at home. Her bestie Angie Winkler pops up in every other photo, too. Otherwise, Heather's feed is full of selfies, so it's hard to determine what her daily life is like — though it is easy to appreciate her go-to holding-my-sweater-sleeve pose.

Heather is in her sisters' Instagram pictures almost as often as they're in hers. On Heather's Sept. 27 birthday, Shannon wrote a heartfelt message to her alongside a photo of them pressed cheek to cheek. "Happy birthday to the girl who I literally spend every waking second with!!" she wrote. "I wouldn't want to do life with anyone else! You are my other half and I love you more than you could possibly know." Aww, sisters.

Instagram also reveals that Heather and Colton met before the new The Bachelor season started airing. Her sister Colie posted a picture herself and Colton at the Mavericks Beach Club in July 2018, following it up with one of Colton and Heather. Colie captioned it, "Virgins all around," with the hashtags #virginlivesmatter, #jointhecolt, #coltonforbachelor, and #pickheather with a laughing emoji. She also suggested people scroll to the next photo to "see Heather and Colton's first one on one."

According to Elite Daily, The Bachelor films in late September for its January premiere, so Colton's run-in with the Martin sisters was a few months before that. That might not have any impact on the season, but it could be a hint at how far she gets in the competition. If Colton already gets along well with Heather's family, they might be a perfect match.