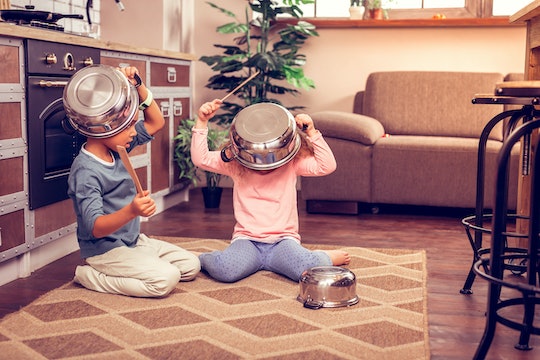 There are a ton of theories and ideas out there about how young children learn. The one consensus among most of the scholars studying early childhood education is that little ones learn best through play. What that means and how to foster a productive play environment is where the divide lies. One of the theories most discussed is the idea of heuristic, or self-guided play. But what is heuristic play exactly?

The concept of heuristic play was first developed in the 1980s by educational scholar and child psychologist Elinor Goldschmeid, who passed away in 2009. She wrote in her book People Under Three: Young Children in Day Care that "Put simply, it [heuristic play] consists of offering a group of children, for a defined period of time in a controlled environment, a large number of different kinds of objects and receptacles with which they play freely without adult intervention." She encourages the use of what she calls a "treasure basket" filled with all kinds of things for children to explore and investigate freely, learning what they do, and what they are by utilizing their own powers of deduction.

These treasure baskets are much like the sensory bags or mystery objects that are so popular in preschools right now. The idea behind this directed play is that children are able to stir their imagination by playing with objects that are foreign to them without adults placing their expectation on the children. Sure, they might pull out a kitchen strainer, but to them, it's a groovy new space helmet or butterfly house.

Learning platform EducA wrote that there is more to this imaginative, interactive space than you would think. The team wrote that "heuristic play is about curiosity and exploration. Children select, manipulate, explore, compare items they discover what the object can and can’t do. This sometimes includes sharing, although sharing is spontaneous. If there are enough items, sharing isn’t required."

Goldschmeid argued that the things placed in the treasure basket should be new or novel to the child, with an emphasis placed on the safety of the children. Heuristic play is typically aimed at children under 3, so it's best to make sure that everything in the basket can be mouthed safely, so no bottle caps, no flowers that aren't edible, and nothing that needs to be explained to the children.

You definitely don't want a situation like the old Saturday Night Live sketch with Dan Akroyd and Candace Bergen "Consumer Probe" with the "Bag O' Glass." It might teach them about light refraction and prisms, but it's still a bag of broken glass.

That's not to say that heuristic play is only for younger children. In New York City, one of our largest park areas, Governor's Island, features a "no parents allowed" building playground, that features everything from saws to lumber and nails. The difference is that at the point where children are ready for that heuristic play, it's not so much about learning the environment, but learning and creating inside of it, and creatively manipulating their own world though self-taught learning.

So what is heuristic play intended to teach? That's the thing — heuristic learning is self-taught learning, meaning that we're not doing the teaching, the person learning is teaching themselves. That's what Goldschmeid argued was so important in early childhood learning, and often missing from the curriculum. Heuristic play allows room for uncritical mistakes and uncompromised creativity. Bot of these aspects of learning are essential when building the foundations for more focused scholarly education, because children who were given the opportunity to think creatively will be more likely to quickly adapt in situations that require fast learning.

Basically? Let the kid play with your pots and pans — it's good for them, even if all their actual toys sit in baskets unused.