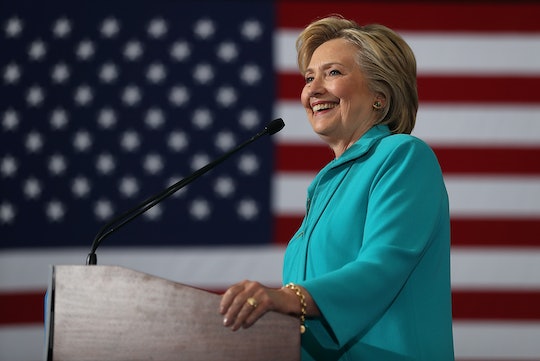 Mental health care hasn't always found its way into mainstream campaign conversations, but Democratic presidential nominee Hillary Clinton is changing that. Though the former Secretary of State spent plenty of time during the primaries debating the merits of Obamacare with Vermont Sen. Bernie Sanders, she's taking time post-DNC to refine and reiterate her approach to ensuring that every American gets the health care they need. On Monday, Clinton's camp released a mental health agenda designed to expand treatment options and answer calls for greater attention to suicide prevention and early intervention. What is Hillary Clinton's mental health care plan? Her ideas are largely in alignment with the policy imperatives identified by major mental health organizations.

Over the past decade, a combination of political, organizational, and media efforts have significantly destigmatized mental illness; it's difficult to remember a time in recent history when mental health concerns were discussed so openly and so often. In part, the shift may be due to a growing body of research showing the frequency of diagnoses: nearly one-fifth of U.S. adults have compromised mental health, according to a statement on Clinton's mental health care agenda published on campaign-associated website The Briefing. Around 17 million U.S. kids also struggle with mental health problems. From Clinton's standpoint, the concern is widespread enough to merit a comprehensive strategy. It appears as though Republican presidential nominee Donald Trump has not yet released any specific mental health care plan, though Trump's position on health care reform is published on his campaign website.

Even when mental health care isn't in the spotlight, a number of nonprofits continually press for policy reforms that ensure movement toward stronger support for those struggling to get critical treatment. Though it would be difficult for one candidate's plan to conform to the preferences of every advocacy group, Clinton's agenda does parallel many of the essential points made by major organizations. The World Health Organization outlined its three top mental health policy recommendations online: deinstitutionalize care, stop excluding mental health from "general health care," and ensure communities have the resources they need to answer mental health concerns. Clinton's agenda prioritizes putting mental health care on equal footing with physical health care, Politico reported. The agenda outlined by The Briefing includes an entire section on "Enforcing Mental Health Parity." Under Clinton's plan, the U.S. Departments of Labor and Health and Human Services (HHS) would have the authority to conduct "randomized audits" of insurers, have mandatory access to information regarding how companies choose who and what they cover, and manage the system for collecting and evaluating reports of parity violation. Clinton's commitment to expanded funding for community health care programs was announced last month, according to Politico; it's likely Sanders' focus on the issue pushed her to do more to support community programs.

Clinton's agenda includes a section dedicated to suicide prevention: a critical area of attention since suicide is the cause of death for more than 40,000 people in the United States each year, The Briefing reported. The American Foundation for Suicide Prevention (AFSP) specifies a number of federal mental health policy imperatives. In addition to assurance of functional mental health parity laws, AFSP advocates for an increase in suicide prevention research funding and consistent attention to preventing suicide among veterans and individuals in the military. Clinton supports expanding National Institutes of Health funding for "brain and behavioral science research," according to The Briefing. In addition to steps outlined in her previously-released Veterans Agenda for answering mental health concerns, Clinton's mental health agenda calls on the U.S. Department of Veterans Affairs (VA) to "research and develop" a suicide prevention plan.

Clinton's plan emphasizes the need to start mental health care early: according to The Briefing, only one-third of kids in the United States who have mental health problems actually get the treatment they need. The National Alliance on Mental Illness (NAMI) released a Public Policy Platform specifying the need for early diagnosis of mental illness, emphasizing the importance of not only increasing access to treatment options but providing environments in which kids can thrive both academically and socially after a diagnosis. Clinton's agenda focuses on supporting kids from the moment they're born through their college graduation, all while increasing training opportunities for educators and facilitating collaboration between pediatric practices in providing the best possible mental health interventions for children.

Training and collaboration are both big parts of Clinton's plan. For example, AFSP also pushes for improvement in mental health care treatment options available to incarcerated individuals; Clinton wants law enforcement officers to be better prepared to respond to calls involving individuals who have mental illnesses, and she's advocating treatment instead of incarceration "for low-level, non-violent offenders with mental illnesses," The Briefing reported.

It's likely that Clinton's plan will be discussed and perhaps modified after advocacy organizations provide their own input, but the choice to deliver a comprehensive mental health care agenda shows a step in the right direction toward destigmatizing mental illness and creating a more equitable health care system for all.