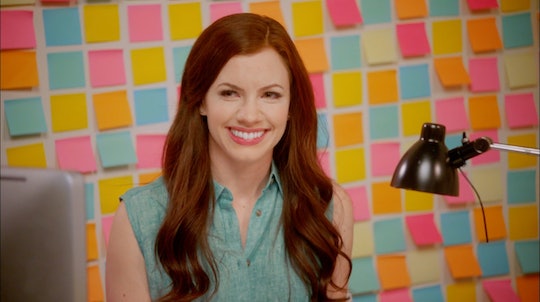 'I Ship It' Might Appeal To The Fangirl In Everyone

I Ship It is a half-hour comedy from the CW that has a fannish twist. Its title is actually a fairly apt one that relies on classic fandom lingo to give audiences a hint as to what to expect: when you ship characters, it means you're rooting for their romantic relationship. And when you find out what I Ship It is about, you might find yourself rooting for its protagonist to find love.

I Ship It is also a musical. Perhaps it can help fill the void that Crazy Ex-Girlfriend left behind in your heart; one can only hope. The show began its run on CW Seed, the network's free streaming service. Season 1 focused on the romantic travails of protagonist Ella's (Helen Highfield) indie band, but Season 2 pivots from music to television. In fact, it gets downright meta, according to the CW's press release.

In the second season of I Ship It, fangirl Ella works at a boutique shipping agency, but she dreams of being a writer. She pens fanfic for her favorite show Superstition, which is a supernatural romance in the vein of The Vampire Diaries or Buffy the Vampire Slayer. It looks like it would be right at home on the CW, too. The satire is coming from inside the house.

Ella's life is small but satisfying. She works alongside her boyfriend Tim (Riley Neldam) and fangirls with her bestie Winnie (Jazz Raycole). But one day she gets a surprising opportunity. Her friend is sending flowers to the showrunner of Superstition and Ella decides to make the delivery herself so that she can visit the set. Somehow she ends up snagging a job as a writer's assistant (if it's that easy to become a writer's assistant on a TV show, then excuse me, I have flowers to deliver), which puts her right in the thick of her biggest obsession.

The trailer offers a few Superstition parody scenes that could be pulled from any number of existing pop culture phenomenons. They feel accurate to the genre down to the heartbreaking character deaths and love triangles. If you're getting Twilight flashbacks, then you're on the right track. Superstition appears to be about witches and vampires, with one character literally catching fire during a fraught moment.

Ella can barely contain her excitement. The trailer concludes with a musical ode to her new job and the thrill it brings to her life — as well as the complications. Though a wink from one of the show's leading men (Ethan Peck) has her squealing in the hallway, it's not all fun and fangirling. Her boyfriend worries that he's losing her to the show. Pro tip, Tim: get over it. Probably more concerning to Tim than his girlfriend's career success is that she ends up smooching someone who is decidedly not him.

Ella's new job is going to shake up her life in an extreme way. It seems like she might even find herself in a love triangle that echoes the one clearly central to her favorite show. If anyone is looking for something new to ship, then I Ship It may have some opportunities.

I Ship It airs Mondays on the CW.