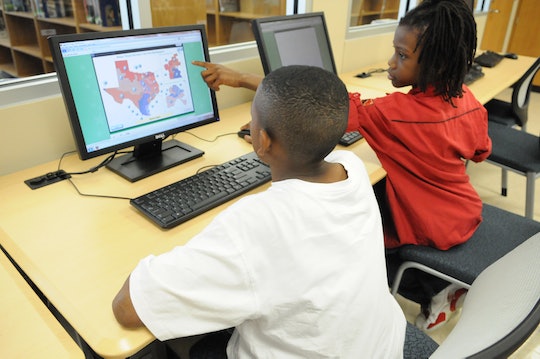 I remember the first time I became interested in politics as a kid. I was in the fourth grade, and my teacher had us follow the 1992 U.S. presidential campaign. My peers and I had to learn everything possible about the candidates, then decide who we most aligned with. (I, being a liberal 9-year-old with limited options, chose Bill Clinton.) But technology wasn't that advanced in the early 1990s, so my class relied on print news and a lot of erasable whiteboard lists. I wonder, though, how much more involved and in-depth the discussions would've been if certain educational, interactive learning tools were around. As it turns out, a non-profit exists providing just that exists — so, what is iCivics and how does it work? The educational non-profit uses interactive games to educate and engage millions of students across the country in political discourse — and it's awesome.

Former U.S. Supreme Court Justice Sandra Day O'Connor founded iCivics in 2009 as a way to help kids better understand how both the U.S. government and political system work, according to VentureBeat. As part of its mission, the non-profit develops nonpartisan games and lesson plans for elementary, junior high, and high school students based on certain topics, from the presidential election to the Constitution, that it thinks "all young people should know about," iCivics Executive Director Louise Dubé told Romper in an email interview.

"Once we’ve picked a topic, we find the best way to put the player in the action," Dubé continued. "Kids really respond to being put in charge of things that are usually reserved for adults." She added:

Taking on the role of a county official, President of the United States, legislator, or community organizer makes the skills and concepts “stickier” because the kids have to own the learning objectives in a real way. It’s also a great way to start a conversation — be it in the classroom or around the dinner table.

Since its inception, iCivics has produced more than a dozen games, including Executive Command, Win the White House, and Immigration Nation — all of which are available in the Google Play and iTunes stores, according to its official website. One its more popular games, Do I Have A Right?, first released in 2011, is also available in Spanish and has supports for English-language learners, such as voice-over, glossary, visuals, and scaffolding, Dubé told Romper. Sonia Sotomayor, the country's first Latina Supreme Court justice and iCivics board member, had a hand in building that version, titled ¿Tengo Algún Derecho?, according to NBC News.

iCivics is currently working on a second bilingual game that will be released in the fall, but Dubé said the non-profit is currently focusing on developing Spanish versions because the country has "an estimated 4.6 million ELL students," more than half of which speaks Spanish, according to the National Center for Education Statistics.

But iCivics is not only interested in teaching kids about U.S. civics. O'Connor's nonprofit launched the new Democracy At Play campaign this week as a way to help parents engage their children in politics. iCivics hopes that parents can use the company's interactive games to show their children what it means to be an active citizen, particularly in today's tense and divisive political climate.

"It’s important for parents to engage with their kids in an age appropriate way because it is habit forming," Dubé told Romper in an email interview. "By talking politics with your child, you're showing your child the value of being informed and aware of what is happening in the community around you. You are situating of children in our world and educating responsible citizens."

My son is only a toddler, so trying to teach him about politics right now would be the same as talking to a brick wall. But as a political-minded mom and journalist, I'm eager try iCivics with him and hopefully engage him the same way my teacher engaged me when I was 9 years old.