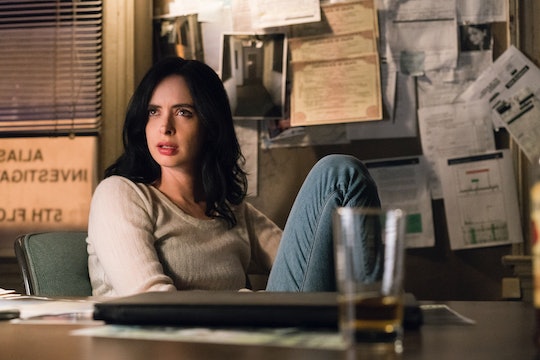 IGH May Hold All The Answers To Jessica Jones' Past

Though Jessica Jones dispatched its main villain at the end of Season 1, not everything was so neatly resolved. One shadowy organization has had a lot of influence behind the scenes, but there is still so much the audience doesn't know about them. Season 2 might answer one very important, pressing question: what is IGH on Jessica Jones? They look like they'll be playing a major part in the upcoming season, so fans of the show might need a refresher on what IGH has done so far.

IGH is an organization that enhances people's abilities by using questionable methods, and they're responsible for Jessica gaining her powers too. After the car accident that cost the rest of her family their lives, Jessica ended up in the hospital, where she was subjected to experiments and surgeries. IGH paid all her bills and also left her with impressive (but inexplicable) super strength. She didn't learn what happened to her until she was an adult, and the trailer for Season 2 makes it clear that this is something Jessica will continue to investigate.

The Season 2 trailer for Jessica Jones opens with a flashback to the traumatic car accident, which seems to indicate that what happened on the road and afterwards are still weighing heavily on her mind. It looks like she'll be digging deeper into the accident and the experiments, and hopefully that means figuring out just what IGH is up to. Jessica probably wasn't the first person they experimented on and she definitely wasn't the last. Those other characters could make appearances in Season 2, though fans haven't met most of them yet — except for one.

Will Simpson was another person with a connection to IGH. During his time in the military, he took part in an experiment that made him incredibly strong but also made his temper uncontrollable. Overseen by a man named Doctor Kozlov, Simpson and other soldiers were given pills called Combat Enhancers; though the medication sped up recovery and increased strength, they also took a toll on the mind.

Simpson stopped taking them at some point, but after run-ins with Kilgrave in Season 1 left him injured, he began to rely on them again. Though they gave Simpson physical benefits, the downsides were major. He became dangerous, violent, and full of rage — with no ability to control himself at all.

It's unclear whether similar methods were used to give Jessica and Simpson their abilities, since they manifested in such different ways. Simpson had to continuously pop pills to gain his strength, whereas whatever happened to Jessica was much more permanent.

In the Season 2 trailer, a new characters explains that Jessica was killed (presumably in the crash) and brought back to life by IGH, with her powers a mere side effect of the resurrection. For Simpson, it seemed like the enhancements were the whole point, which could be why the results varied so much between the two. Jessica's strength was an accident that seemingly could not be reproduced.

But viewers have only seen the havoc IGH wrought without knowing the source or the true goal of the group. When Trish tried to investigate further, she couldn't find any solid leads and that seems to be a sign that IGH is hiding even more than fans might suspect. Luckily Jessica is a private eye, so if anyone could get to the bottom of this, she could.

Figuring out the truth might finally help Jessica come to terms with another pressing part of her past, and perhaps even find a little bit of peace. At the very least, it will give her a new mission — and a new enemy to overcome.