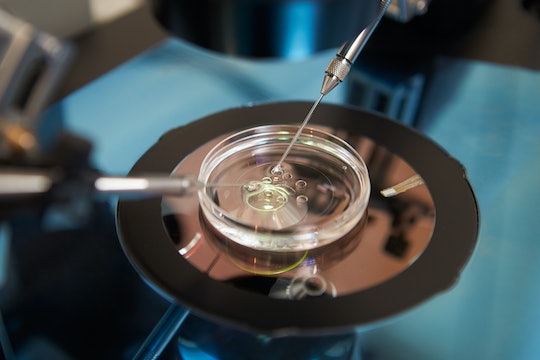 What Is In Vitro Fertilization? IVF Is Helping Thousands Of Couples Become Parents

Although many pregnancies happen after two heterosexual people copulate, resulting in a fertilized egg, that’s not always the case. Some people have difficulty conceiving a child, or perhaps don’t have a partner (or a partner with whom they can have procreative sex), and may need to seek an alternate route to conception. Luckily, in this modern day and age, there are many options to help people conceive babies that don’t involve penis-in-vagina intercourse. One of those options is in vitro fertilization, also known as IVF.

According to the American Pregnancy Association, in vitro fertilization is a fertility procedure in which egg and sperm are combined in a laboratory. The embryos that result from this fertilization are then implanted into a person’s uterus, where they can grow into a baby. The outcomes for successful IVF procedures (with success being defined by the birth of one or more babies) can vary greatly, and the age of the person carrying the baby matters. The most recent data from the Society for Assisted Reproductive Technology shows success rates at about 42.5 percent for women under 35 and 34.5 percent for women 35 to 37. The rates drop further as a woman’s age increases.

A huge barrier to IVF for many people is the cost. Most insurance companies don’t help cover the cost of fertility treatments, and IVF is no different. According to the American Society for Reproductive Medicine, in vitro fertilization costs an average of almost $12,400 per cycle, not including medication costs, and it can often take more than one cycle to successfully conceive. The costs are prohibitive for many people.

Lots of people get IVF, and there are a variety of reasons that someone might use IVF to assist with getting pregnant. If you have problems with ovulation, egg, quality, or uterine fibroids, IVF may be a good option. If you have blocked fallopian tubes or no fallopian tubes, you may want to consider IVF.

If your partner’s sperm has decreased motility or count, you may need to try IVF. If you’re using a sperm donor, IVF is used. If you have endometriosis, you may need to use IVF to assist with conception. Or, if nothing else has worked and you’re still having trouble conceiving, a doctor may recommend giving IVF a shot.

The process of going through IVF is a long and involved one. There are five basic steps to IVF, though each one has multiple parts. The first step involves being given fertility medications to stimulate egg development, which is monitored by the practitioner. You administer the medication yourself at home, often in the form of injections. Next, the eggs are retrieved, which involves a minor surgical procedure. Then, the sperm is collected from one partner, a known donor, or purchased from a sperm bank.

After both the eggs and the sperm have been collected, something called insemination takes place in a lab. The term is basically just a fancy word for the process of combining the egg and sperm together in the hopes of achieving fertilization. Once the eggs are fertilized, the resulting embryos get implanted into the uterus.

What Are Some Challenges To IVF?

Once the embryos are implanted into the uterus, they may not take. It can be emotionally and physically draining to go through more than one cycle of IVF, get your hopes up, only to be disappointed. The process can take a toll on people and be incredibly difficult.

There’s also an increased chance for conceiving multiples with IVF, because multiple embryos are sometimes implanted to increase success rates. And while it does, it also leads to increases in multiple births. In fact, the odds of having twins or more are as high as 20 percent, according to BabyCenter. Although this isn’t necessarily a bad thing, multiple fetuses also increases miscarriage risk and risk of going into labor early.

There are lots of ways for people to get pregnant, and they’re all valid. IVF is one way that helps many people achieve their dream of giving birth.

More Like This
What Foods Fight Nausea During Pregnancy?
OB-GYNs Explain The Connection Between Stress & Miscarriage
22 Valentine's Day Pregnancy Announcement Ideas Sweeter Than Candy
Fun, Sexy Maternity Lingerie, For When The Mood Strikes
What Parents Are Talking About — Delivered Straight To Your Inbox