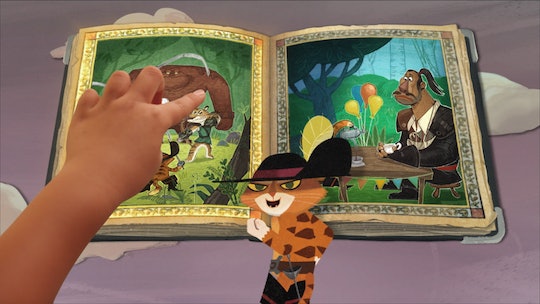 Interactive Storytelling Is Officially On Netflix

Netflix is once again tapping into a market that is going to leave consumers (particularly families) obsessed. On June 20, the first piece of interactive storytelling will be available on Netflix. Netflix will be taking on a form of entertainment that, up until this point, has been exclusive to video games and the Choose Your Own Adventure books we were all obsessed with as kids. That's right — you're going to have a say in the story you stream on all of your devices.

The very first interactive storytelling title is Puss in Book: Trapped in an Epic Tale, which is a tie-in to the Netflix original series The Adventures of Puss in Boots. Next up, on July 14, Buddy Thunderstruck: The Maybe Pile will be coming from the Netflix original Buddy Thunderstruck. Both shows are obviously aimed at kids, but playing through the interactive storytelling should be fun for parents, as well. Both of the interactive titles come from content Netflix has already produced, but it's possible that they will produce original interactive series or movies if these first attempts prove successful.

And, if you're afraid that this is going to add an extra layer of complications to your kid's viewing habits, don't worry. Netflix has built the interactivity right into the program, so there are no additional pieces to play. Interacting through the story is pretty basic: every so often, a set of choices will appear on screen and it's your job (or your kid's job) to pick one of the choices that will influence the story to come. On a computer, this just means clicking with your mouse or trackpad. On a television, you use the remote (so don't lose it in a cushion). On an iPad or tablet, you use the touchscreen.

The initial interactive content is targeted at kids, as it's a bit less of an investment to create the relatively simple storylines of children's shows than the complex ones adults are more likely to consume. But if those work out Netflix may be moving on to interactive content for adults. So who knows? Maybe someday we'll get to help Frank Underwood and Piper Chapman make decisions. Or maybe we'll get other, new stories to have a hand in. The possibilities are really are limitless with this new technology.

Puss in Book: Trapped in an Epic Tale will be available for streaming/playing on June 20 on Netflix.