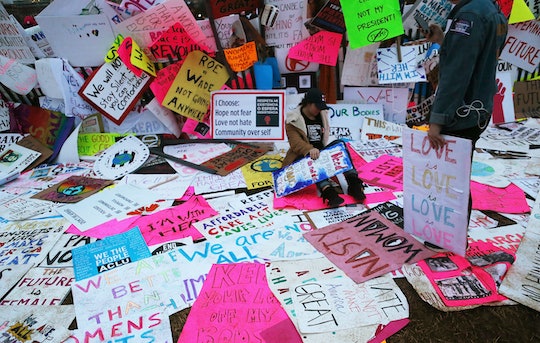 A Primer On Intersectional Feminism

Since the Women's March on Washington, conversations about what the march was meant to represent, and what kind of message it actually sent, have abounded on social media. One of the most vital conversations that has continued online and off since the march is about how feminism can sometimes be presented in ways that's exclusionary. What is intersectional feminism, and why is it so important?

Feminism, both its older and current incarnations, relies on this false concept that all women are equally oppressed, a narrative that is often pushed by white women who experience substantial privilege. When feminism is framed to cater to the experiences of only white women, it fails to address the greater degree of oppression experienced by millions of others who either don't experience white privilege, or who may experience white privilege but still experience added oppression due to a disability, economic status, their sexual orientation, or a myriad mixture of other demographics.

Intersectionality focuses on how women have multiple identities that influence the degree to which they experience oppression, and emphasizes that not all oppression is created equal. It encourages those who experience white privilege to use their privilege as a way to elevate the voices of those who are further marginalized due to race, sexuality, gender identity, religion, or physical and mental disabilities.

Another area of discussion that has really brought intersectional feminism to the forefront in relation to the Women's March is the exclusion of non-binary and trans* folks. Many of the slogans, signs, and other demonstrations of protest and unity amongst women at the march were reproductive-organ focused. While references to uteruses, ovaries, and menstruation have always been historically important to women in eras when they had little else to cling to in terms of identity, using reproductive organs as foci erases the experiences of the trans and non-binary communities.

While it's important for us to engage in productive conversations about reproductive justice and health, these issues are not limited to certain organs. Even for women, having uteruses and ovaries are not necessarily lifelong commitments — and making these the crux of modern feminism isn't just exclusionary to those who identify as women but don't have these reproductive organs, but to women who have had hysterectomies, or who are congenitally missing one or several of those organs.

Marches, and protests, in general are also often criticized by members of the disability community. Disability rights activists have been working toward equality in the realm of healthcare and medicine, including mental health, for decades. Their unique perspectives and contributions may be missed, overlooked, or invalidated by many larger organizations who don't make events accessible.

If someone suggests you "check your privilege," the defensiveness you feel probably stems from the fact that you don't think you have privilege. Or, if you acknowledge that you have privilege, that you don't understand how your privilege can be oppressive to someone else. (And, it might stem from the fact that you have experienced hardship or oppression.) For feminism, specifically, to become truly intersectional, white women who have privilege must commit to using it to elevate those who do not. Like the spectrum of oppression, there's a spectrum of privilege, too. We all find ourselves somewhere on that spectrum, and the best thing we can do is be honest about where we are, and think about ways to elevate those who we see have less privilege than we do. Acknowledging your privilege doesn't mean consenting to oppression.

Intersectionality may be viewed as being "too hard" by feminists who seek the instant gratification that would come from the advances they could make for themselves as a result of their privilege. Perhaps it's that they don't want to be "bogged down" by having to consider so many other perspectives, experiences, and identities that don't directly impact their experience.

The very ideal of equality means that until we are all equal, no one is. If you're only working toward the kind of equality that is achievable for you, that's not feminism, and it's certainly not intersectional feminism.