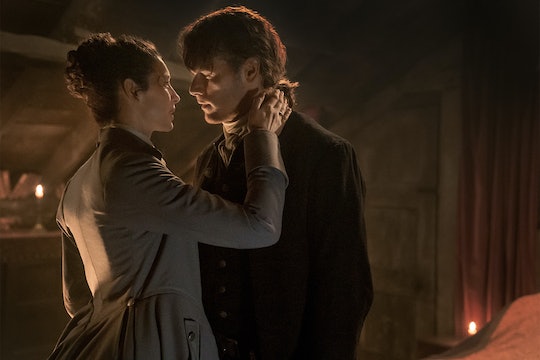 Jamie Is Keeping A Big Secret From Claire On 'Outlander'

After waiting for a million years, give or take, Jamie and Claire have reunited, but if Claire thought everything was going to be just hunky dory with no problems whatsoever, boy was she ever wrong. Everybody has secrets and it seems our beloved Jamie is no exception to that rule. Shortly after their reunion, it became obvious he was keeping something from the love of his life, but what is it? What is Jamie hiding from Claire on Outlander? Their epic return to each other comes with a secret, and it could mean serious problems in the future.

Blessedly, in Episode 6, the showrunners didn't torture audiences by drawing out the moment when Jamie and Claire see each other. The moment happened early in the episode. When Jamie woke up, the two shared an emotional kiss and then Claire told Jamie about Brianna and showed him some photos of her. To his credit, Jamie seemed less freaked out than might be expected after seeing the daughter he's never met all grown up. In return, he then told Claire about his son, Willie.

But based on the short conversation between Jamie and Fergus just a little while later, there is still something major that he's hiding from her. So what is it? It can't be worse than a secret English lovechild that no one is allowed to know about, can it? Or an illegal smuggling business? Well, it might be. Warning: book spoilers ahead!

In the third book of the series, Voyager, after Claire finally returns to the 18th century, things are lovely for about a second. She and Jamie are holed up very comfortably in the cozy room in the brothel before Ian Murray storms in looking for his son, also named Ian, and justifiably flips out slightly when he sees Claire, believing her to be dead. After all, the woman hasn't appeared for the past 20 years. Well, that takes Claire and Jamie back to Lallybroch where they find the last person anyone wants to deal with waiting for them. That would be Laoghaire. You probably remember her as the pretty, jealous teen girl who tried to get Claire hanged for witchcraft. Well, now she's officially Jamie's second wife. For obvious reasons, this causes all sorts of problems.

If you've been paying attention to the Outlander news that came out during Droughtlander, you probably could have already guessed that Laoghaire was coming back. Casting news announced that her daughter, named Marsali, would be appearing in the show played by Lauren Lyle. While Marsali has her own adventures in the series, her mother has to have her own drama first. Naturally, Jamie having married Laoghaire, the woman who tried to have Claire killed, caused quite a few issues. In fact, Claire almost decides to turn right back around and go back to the 20th century. Obviously, this can't actually happen, especially after all we've gone through as an audience to get these two lovebirds back together.

In the book, Ned Gowan, who is miraculously still alive, puts his legal brain to work and decides that Jamie's marriage to Laoghaire is invalid because his marriage to Claire never actually ended. Nevertheless, Jamie will have to support Laoghaire in some way as sort of reparations for the unfortunate error. This requires dowries for her daughters and quite a bit of upkeep. The subsequent scrambling for cash sets in motion the action that will take place over the rest of the season.

Seeing as Jamie had already told Claire about Willie and the smuggling and his questionable friendship with the Madam of a brothel, you'd think he could find the courage to tell her he was married — probably the most important thing for her to know at this moment. I know he's scared to lose her again, but come on now. That is a very big secret. I know it will all be alright in the end because if there were ever two people meant to be together it is Claire and Jamie. But I don't think we need any more heartache, do you?