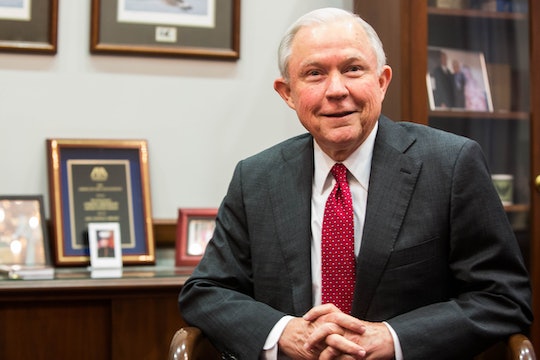 What Is Jeff Sessions' Net Worth? His Surprising Rank Among America's Richest Cabinet

It was Alabama Sen. Jeff Sessions' endorsement of Trump just days before the GOP's Super Tuesday primary that gave the now President-elect just the right amount of establishment street cred he needed to put away his GOP rivals. Now Sessions' loyalty has been rewarded with a sweet attorney general nomination in a cabinet chock full of plutocrat insiders. What is Jeff Sessions' net worth? The answer might surprise his grassroots Tea Party base of support.

"I hate to say it, I'm becoming mainstream," Trump joked in front of a crowd of more than 30,000 people at the Wisconsin rally last February, where Sessions publicly expressed support for his candidacy, according to POLITICO. "I'm getting all these endorsements."

But before Trump came along and blew up all the usual rules of politics, Sessions would have been considered pretty far right of the mainstream.

He's a climate change "skeptic," according to the Washington Post, and during a 2015 hearing, he was questioning Gina McGarthy from the Environmental Protection Agency when he said, "Carbon pollution is CO2, and that’s really not a pollutant; that’s a plant food, and it doesn’t harm anybody except that it might include temperature increases," according to the Washington Post. Mkay.

According to the Washington Post, his voting record also includes voting against any legislation that includes a "path to citizenship" for immigrants and even against legal immigration measures. Sessions wrote a Post op-ed in 2015 that said "What we need now is immigration moderation: slowing the pace of new arrivals so that wages can rise, welfare rolls can shrink and the forces of assimilation can knit us all more closely together.”

Never mind the American immigration tradition, not to mention all of that Statue of Liberty "poor huddled masses yearning to breathe free," mumbo jumbo.

Sessions was also was denied a federal judgeship in Alabama in 1986 for a joke about the Ku Klux Klan when he allegedly said he thought they were "okay, until he learned that they smoked marijuana," according to the Washington Post. Sessions hasn't responded to Romper's requests for comment regarding the alleged jokes.

But none of those controversial statements of positions have been enough to derail Sessions' career as a successful attorney and senator who's been in office for 20 years, according to the Post. And he's made a nice living. According to Center for Responsive Politics, a non-profit that tracks data on campaign finance, Sessions is estimated to be worth about $7. 5 million, the Boston Globe reported.

Sessions joins a group of Trump cabinet appointees whose net worth, including Trump's, is a combined $11 billion, according to the Boston Globe. The Globe added that that number only includes the Cabinet posts that have been filled so far, which is only about half of them. Sessions ranks down toward the bottom of the wealthiest Cabinet members. The only member less wealthy than Sessions, so far, is Vice President-elect Mike Pence, whose estimated net worth is just over $200,000, according to the Globe.

Doesn't seem immigration has driven down the wages of any of these Americans.