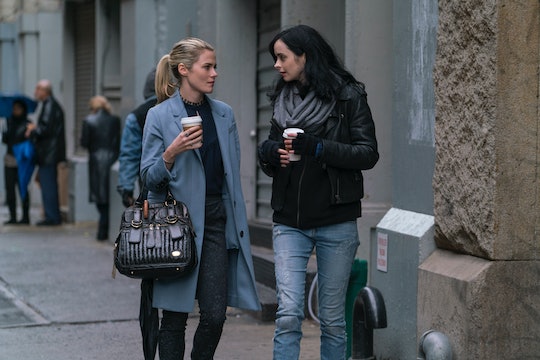 Every group of superheroes has to have that one person that is a reluctant participant in the team. In The Defenders, that person is Jessica Jones. However, if you didn't watch Jessica's individual series on Netflix you may not know that much about her. So what is Jessica Jones' Marvel Comics origin story? Let me start off by saying that she's been through a lot.

When Jessica was young, her family got into a car accident, killing her parents and younger brother, Phillip. Left as an orphan, she was adopted by Dorothy Walker as a publicity stunt for her daughter, Trish, who was the star of a television show. While living with the Walkers, Jessica discovered she had incredible strength, an ability she didn't have before the accident.

Jessica became Trish's defender against her mother, who physically abused her, and the adoptive sisters became close friends. As an adult, Jessica stumbled through a lot of terrible jobs, before deciding she wanted to use her powers to help people. However, her plans for becoming a quasi-superhero were derailed when she caught the eye of Kilgrave, who used his power of mind control to make her his prisoner.

She remained under his power for months, until he forced her to kill Reva Connors, Luke Cage's wife. The trauma of having to kill someone allowed Jessica to fight off Kilgrave's control. He was then hit by a bus, seemingly killing him. However, she later discovered that wasn't the case.

Because of Kilgrave's torment, Jessica suffered from PTSD and became an alcoholic. She also gave up on her dreams of being a superhero and instead became a private investigator. However, when Kilgrave returned, Jessica decided she had to face him and take him down once and for all.

With the help of Trish and Luke Cage — with whom Jessica briefly entered into a relationship with — she was able to defeat Kilgrave. Along the way, Jessica revealed to Luke that she was responsible for the death of his wife. He was also put under Kilgrave's control and Jessica had to shoot him in the head to stop him from hurting her. Though he was able to survive the shooting (thanks to Claire Temple), the event abruptly ended his romantic relationship with Jessica as he was gone when she returned to her apartment.

Once Kilgrave was killed, Jessica went back to her job as a PI. However, towards the end of the season it was revealed that Jessica and Trish would begin looking into IGH, the organization that was responsible for giving Jessica her powers, amongst other things. For now though, it looks like her immediate concern in The Defenders will be figuring out how to work with three other people in order to save New York from The Hand.