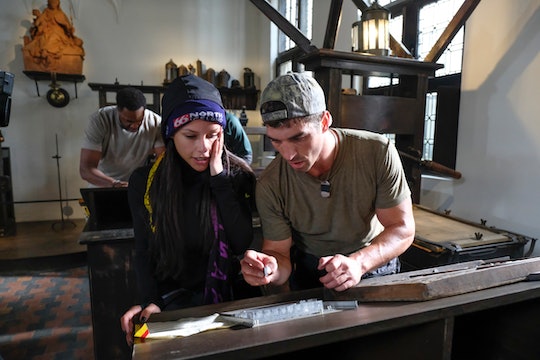 Jessica Graf and Cody Nickson fell in love last summer when they met in the Big Brother house. Though neither of them won the $500,000 grand prize, they've gone on to find their own success and fan base outside of the house. Now they can once again be found on TV, competing in The Amazing Race. However, unlike Big Brother, the season is prerecorded so Jessica and Cody are actually home right now. So what is Jessica's job after The Amazing Race?

Prior to appearing on Big Brother, Jessica was a VIP concierge. Following her time in the BB house it looked like Jessica was considering going into acting after she got a two episode role on CBS' soap opera, The Bold and the Beautiful. But since then, Jessica seems to have left acting behind and after The Amazing Race she's turned her sights to YouTube instead.

Jess and Cody have begun their own YouTube channel called Living Jody, playing on their couple name "Jody." Their channel has already earned 20,000 subscribers and over 316,000 views. On the channel, the pair give fans a look into their home life with their dog, Bear, and their every day activities. So far they've posted videos that reveal some of their favorite recipes, what they packed for The Amazing Race, and some of the items they were able to keep from their time in the Big Brother house.

Besides their YouTube endeavors, Jessica is also an Instagram promoter for a few brands like Teami Blends and Sugar Bear Hair. Outside of that, it looks like Jess isn't working and even listed herself as unemployed on her Amazing Race profile. Still, despite not having a day job, it's clear both Jess and Cody are doing well with whatever income they do have coming in.

Not only do they currently share an apartment in Los Angeles, but they recently revealed in one of their videos that they're currently planning a move to Dallas, Texas, where they'll either rent another apartment or actually buy a house together. The move is most likely because Cody's daughter, Paisley, probably lives in the Dallas area with her mom. Cody is also originally from Plano, Texas so that's most likely where the majority of his family resides.

Although Cody and Jessica met less than a year ago, it's clear their showmance is more than just that. These two are serious about each other and are truly committed to their relationship. They often joke about their future kids in their YouTube videos and the topic of marriage has come up once or twice. Perhaps there are wedding bells in their future. If they do win The Amazing Race, that prize money could definitely help cover the cost of a wedding and a new home.

While Cody and Jess, of course, know whether or not they won The Amazing Race, fans will just have to keep tuning in to see if they walk away with the $1 million prize. However, based on the first two episodes, Jess and Cody definitely have a good shot at going all the way. The couple came in second during the first episode and then came in first last week, winning themselves $2,500 each in the process. However, The Amazing Race can quickly change week to week and although Jess and Cody are doing well now, that could easily change.

Still, I'm continuing to root for them. You can see what's up next for Cody and Jess when The Amazing Race airs each Wednesday at 8 p.m. EST on CBS.

More Like This
Prince Louis Is Asking His Parents Questions As He Tries To Understand Queen Elizabeth’s Death
Kate Middleton Shares How Her "Little Louis" Comforted Her After The Queen's Death
Archie & Lilibet Can Now Be Known As "Prince" & "Princess" After The Queen's Death
Kim Kardashian Stars In Hilarious House Of The Dragon Parody, The Targashians