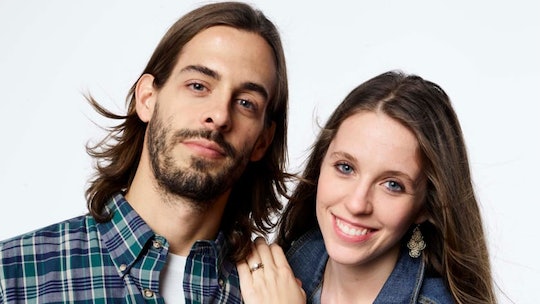 What Is Jill Duggar's Net Worth?

The Duggar family's second daughter has jetted down to Central America once again, according to People, this time with her husband, Derek Dillard, and their son, Israel. The couple doesn't work in the traditional sense, so some fans may wonder how they're paying for these trips. Just what is Jill Duggar Dillard's net worth? One estimate puts the amount at about $400,000, but that's from a questionable source that offers no supporting evidence, so take that with a grain of salt. The entire Duggar family's net worth is thought to be $3.5 million, but keep in mind that that amount is spread over literally dozens of people, so it's not quite as much as it seems.

Jill's net worth in particular has been the source of much speculation, as she and Derrick ran into some controversy in 2015, after their last trip to Central America. The couple said that they were there doing missionary work, but some fans questioned the lack of photos. After it was revealed that they'd taken breaks from their mission to attend weddings, and used donated money to fund the trips, the couple began offering refunds to donors who felt that their money had been spent inappropriately. The couple still solicits donations to the Dillard Family Ministries on their blog. Romper's request for comment was not immediately returned.

Of course, there are other sources of income besides donations. Jill appeared on TLC's 19 Kids and Counting with her parents and siblings, as well as a standalone documentary, Breaking the Silence, with her sister Jessa Duggar Seewald. The documentary addressed the revelation that the Duggars' older brother, Josh, had molested them when they were younger, and the controversy surrounding their parents' perceived mishandling of the situation. After the scandal broke, 19 Kids and Counting was canceled. The Duggars did not immediately respond to a request for comment. A statement posted to Facebook read, in part, "We pray that as people watch our lives they see that we are not a perfect family. We have challenges and struggles everyday." Josh's statement followed his parents:

Twelve years ago, as a young teenager I acted inexcusably for which I am extremely sorry and deeply regret. I hurt others, including my family and close friends. I confessed this to my parents who took several steps to help me address the situation. We spoke with the authorities where I confessed my wrongdoing and my parents arranged for me and those affected by my actions to receive counseling. I understood that if I continued down this wrong road that I would end up ruining my life. I sought forgiveness from those I had wronged and asked Christ to forgive me and come into my life. I would do anything to go back to those teen years and take different actions. In my life today, I am so very thankful for God’s grace, mercy and redemption.

After the cancelation, TLC gave Jill and Jessa with their own spinoff show, Jill & Jessa: Counting On. According to Deadline, the third season will premiere on June 12. E! News has estimated that TLC pays its reality show casts anywhere from $25,000 to $75,000 per episode, which generally take about a week to shoot. Season 1 aired 9 episodes, and Season 2 had 13 episodes. Finally, Jill also co-authored a book, Growing Up Duggar, with Jessa and two other sisters, Jinger and Jana, which is rated quite highly by readers. With another baby on the way next month, perhaps fans can look forward to another book by Jill.

More Like This
What Exactly Are Minions, Anyway ?
Megan Fox Explains Why She Asked Machine Gun Kelly If He Was Breastfed As A Baby
Victoria Beckham Reflects On Being Forced To Weigh Herself On TV After Giving Birth
Sarah Levy Reveals Birth Of Her Baby Boy & His Name Is A Sweet Tribute To Her Dad