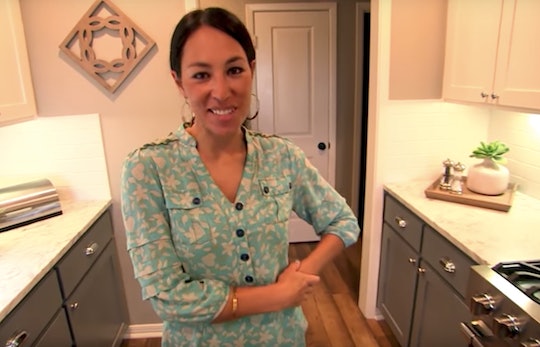 Joanna Gaines Just Teased Her Book On Instagram, & Here's What We Know

It seems like Joanna and Chip Gaines literally never stop working. Further proof of their dedication to HGTV's Fixer Upper and Magnolia Market? Joanna Gaines announced that she's writing a book on Instagram Wednesday night. So what is Joanna Gaines book about? According to her Instagram caption, it's going to be a "design book," so any of her Fixer Upper fans should keep their ears and eyes open for its release date to get all of her totally, always on point home decorating tips.

Gaines posted a picture of her open laptop, with one image being edited, and wrote:

Day 1 of shooting images for my design book! I got so giddy when we captured the first few photos. We have been preparing for this book for so long and I’m excited to finally see it take shape. It will be a deep dive into all things home and design with lots of pretty details. I can’t wait to share it with you!

The 39-year-old mom and home decorating guru hasn't mentioned a title for the book or a release date, but since she's apparently started taking pictures for it, it has to be coming sometime soon. She and her husband Chip have another book called The Magnolia Story, which is a book they worked on together about how they built up their home flipping and decorating business.

This looks like a pretty exciting new solo project for Joanna. It must be a busy time in the Gaines' household. In addition to Joanna's announcement this week that she has a book en route, her husband Chip announced in May that he was working on a memoir, too. So if you ever wanted to know more about their lives, apparently, now is the time.

Chip said of his book, "I’ve done so many dumb things in my day that I had enough material to write a book…so I did!” His memoir will document how he came up in the house flipping business in Waco, Texas.

According to a statement from the publisher:

In Capital Gaines, we walk alongside him as he relives some of his craziest antics and the lessons learned along the way. His mentors taught him to never give up and his family showed him what it meant to always have a positive attitude despite your circumstances.

Chip's book will be available this fall, and by the time you finish it, hopefully Joanna's book will have a release date, too. It's a good year for Fixer Upper fans who want to know all the tips and tricks to living like the Gaines family.