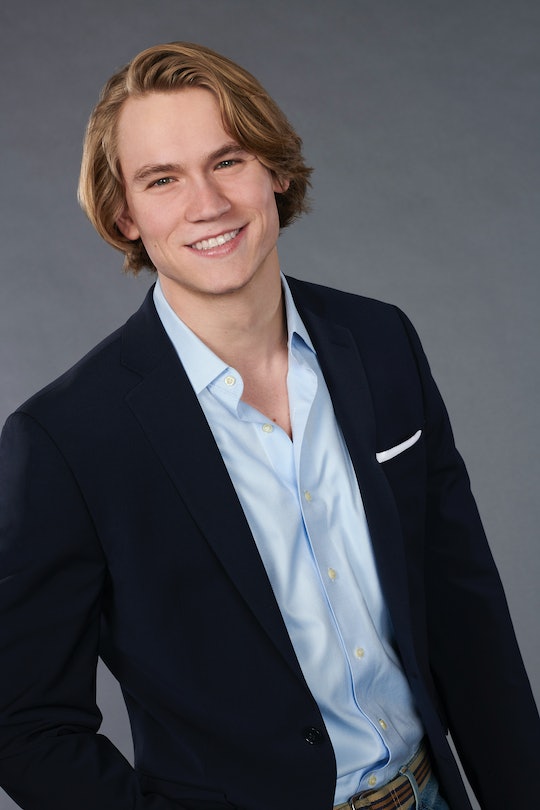 From his initial limo entrance and introduction on The Bachelorette the slightly offbeat John Paul Jones made a name (or three) for himself as the the one most likely to stand out. Even if you weren't required to refer to him by all three names at all times, his Prince Charming hair definitely makes him one to watch. So I wanted to know more. Like, does John Paul Jones' Instagram reveal another side to the seemingly one-note contestant?

I honestly didn't think JPJ would still be around a few episodes in, but since he is, I scoured all 28 Instagram photos to get a better feel for who he is — outside of the cameras — so you don't have to. It was a brief scroll. The first photo was posted in Oct. of 2013, and shows a baby-faced JPJ with a woman that could be his mom. It's hard to say, as he doesn't caption or tag everything. There are a few more possible family members in other photos, which I'm guessing only because they all resemble JPJ in some form. I'd even go so far to say he has a relative who is the spitting image of Woody Harrelson. So, there's that.

Before the Lanham, Maryland native's rise to fame, Bachelorette host Chris Harrison said JPJ is a "way of life" and a "mood," which is the best description of a contestant maybe ever. JPJ's Insta bio simply says "happy to be here."

Perhaps he gets his on-screen confidence from his experiences acting. He once starred as Hal in a production of William Inge’s Picnic at The Catholic University of America (he went there from 2013 to 2017). Though his ABC bio once mentioned he was a financial analyst, it's since been changed to say the obvious: "John Paul Jones." His bio also states he's "looking for the real deal," and that "he often contemplates the meaning of life," and "rarely uses words that are less than three syllables long." I see now why it's difficult to paint an accurate picture from TV, or Instagram pics alone. He's a complex guy — something Hannah sees potential in, so far.

OK, so it might be hard to get a clear read on who JPJ is outside of Hannah's interactions with him. He doesn't seem to be into using his newly found fame to sell things on Instagram or anything, which says he's probably there for the right reasons. On the other hand, it's hard to get past the whole "John Paul Jones" thing when his social media presence doesn't tap into anything deeper. So far, all I've gathered is that he likes to fish, wear togas, show off his abs, and stand out in a crowd. Oh — and he knows how to make Hannah laugh/cry while he endures simulated labor contractions on a group date. Classic John Paul Jones. At least he knows his strengths, I guess.

TBH, I don't think JPJ will go much further on this journey to Hannah's heart. Nothing against the poor fellow, but as a viewer I'm getting more comedy than true love vibes from him.

TV doesn't always show it all, so maybe Hannah sees something in him I can't. Anyway, it's her journey — not mine. So, get after it JPJ — and post a few pictures on the 'gram while you're at it.