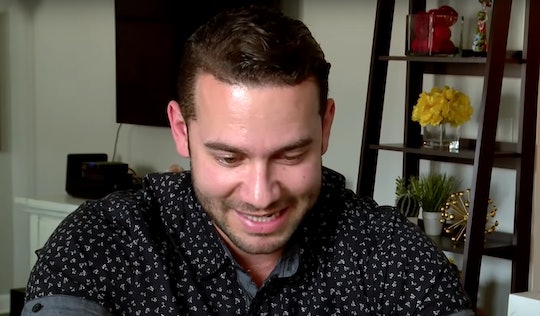 Fernanda Is Super Supportive Of Jonathan's Career On '90 Day FIance'

90 Day Fiance is back with its sixth season, and on the premiere episode, viewers were introduced to new couple Jonathan Rivera and Fernanda Flores. The lovebirds met when Jonathan was vacationing in Mexico, and have since gotten engaged. Fernanda’s Instagram shows that the 19-year-old is just starting to build her brand, but what about Jonathan? Fans want to know: what is Jonathan’s job from 90 Day Fiance?

In Jonathan’s bio on his Instagram page, he lists his job as the owner of Rivera Realty Group, a real estate agency based in North Carolina. He is a Chicago native who attended the University of North Carolina at Pembroke, and according to his Linkedin page, he closed over 4 million dollars in property sales in his first year of business. Jonathan’s real estate agency is based in the town of Lumberton, and his Linkedin bio boasts that his bilingual skills make him the only Spanish speaking real estate broker in the county.

On his Instagram page, Jonathan promotes the properties he is selling, and Fernanda seems to be pretty supportive of his career. In one post, Fernanda shared a picture of herself in a t-shirt with Jonathan’s company’s name on it, with the caption “I am Rivera Realty Group.” In another post, Jonathan shared a picture of his bathroom mirror decorated with encouraging words from Fernanda like “never give up” and “I love you” written in lipstick and a series of post-its. “Fiancé leaving words of encouragement in the morning,” he captioned the photo. “I knew she was a keeper.”

In the first episode of the season, the couple described how they met at a club in Mexico, and shared such an instant chemistry, that Jonathan extended his trip to spend more time with Fernanda. “When she walks into the room, people stop and look — that’s exactly what she did to me when I met her — I swear, it’s like everything stopped,” Jonathan said in a confessional on the show. “We got off the dance floor after about an hour and a half and spent the rest of the evening talking. I switched my flight — ended up staying three more days and it turned out no one brings the best out of me like Fernanda does.”

After three months of dating long distance, Jonathan proposed to Fernanda, and the couple was engaged. He applied for her K-1 fiance visa to bring her to the US, and the series follows the couple’s journey during the 90 day window the federal government requires them to get married within.

For the most part, the couple seems to be doing well, but on the show, Jonathan revealed that he fears his 12-year age gap with Fernanda might become an issue. “She has a really short past so Fernanda jokes all the time that I robbed her of her youth,” he said on the first episode. “The biggest fear I have in these 90 days is that Fernanda would change her mind. That, if one day, she looked at me and she said, ‘You know what? You already lived your life, sorry like, I need to live mine.'”

Despite the large age difference, the couple seems to be one of the strongest on the show this season, and fans are rooting for them to make it work. If Jonathan and Fernanda’s social media pages are any indication, it looks like the two share a very loving relationship, so they just may make it down the aisle. But with a short 90-day deadline pending, you never know what can happen, so fans will just have to wait and watch.