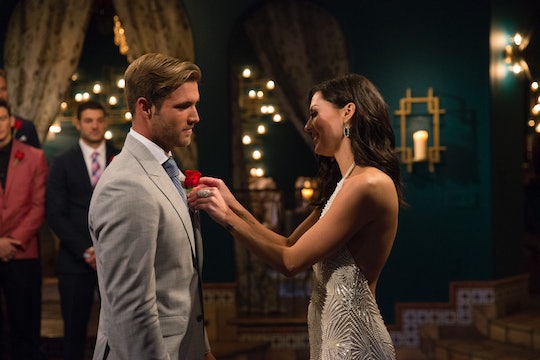 Jordan's A Big Time Model So What's His Net Worth?

On The Bachelorette, there's always that one contestant that provides the lol's — either intentionally or not — at least for the first few episodes. This time around it's Jordan Kimball, a model. What is Jordan from The Bachelorette's net worth? Unlike former Bachelor Nation "models," it appears that he's actually made a living off his face just like he says he has.

According to his ABC biography, Jordan is a 26-year-old male model from Crystal City, Florida. "A former Business/Accounting major, Jordan turned his good looks into a professional modeling career," the bio states. "When he's not posing for magazines shoots giving his best 'pensive gentleman' look [oh dear], Jordan enjoys kayaking and running." After reading all these biographies, I do wonder if it's the contestants themselves writing them. The bio goes on to say, "With a personal best mile time of 4.24 Jordan's excited to sprint to the finish line with the Bachelorette."

Well then, that was quite a lot of information about Jordan. But on last Monday's Bachelorette premiere, he didn't hesitate to tell fans about himself either through talking head sand monologues. Apparently being a "pensive gentleman" is Jordan's actual brand, and his choice to wear a gray suit was a very conscious one to stand out.

As HuffPost reporters put it, Jordan is both kinda "hateable and basically harmless." He's also pretty darn gifable, as GIPHY has already blessed Bachelor Nation with a ton of Jordan reaction gifs. Perhaps he's so good at emoting because of his model work. Speaking of which, if he can make a living off of it, how lucrative has it been for him?

Unfortunately, the internet has no information (yet) about Jordan's net worth. It's probably too early, but I know that true Bachelorette sleuths are on it. For now, fans like me will be speculating whether Jordan is this seasons' Bachelorette "villain." As always, the audience needs to take this term with a grain of salt as villains are always the product of some clever editing. In Jordan's case, he's had some wicked one-liners so far that editing magic isn't responsible for, but I still think it's early yet. Furthermore, from his Instagram, Jordan already appears to be hanging out with some of his fellow Bachelorette contestants:

Jordan received a lot of screen time during the premiere, probably because of all the ridiculous things he was saying. While some fans may be weary, he does seem to be here for the right reasons (at least from what was shown so far). In an interview with Glamour, Jordan explained how he got on The Bachelorette and what he likes about Becca. "I was in Venice in Los Angeles at a Whole Foods and a producer approached me," he said about being cast. A friend had also nominated him, so he was both nominated and recruited.

This interview did not disappoint, as Jordan laid out a couple rules he keeps for himself: "I live every day like a gentleman," he told Glamour. "I drink only two glasses of wine at most unless it’s a really big celebration, and then pinot grigio is my go to. Sauvignon blanc." So, no, he's not going to get sloppy with the other guys (but I'll still keep my hopes up). He also said his biggest fear in a relationship is "that you give your all to that person in a relationship and fall hard, and maybe they weren’t in it to win it like you were." Well, Becca is definitely ready to do the damn thing, so perhaps Jordan will be at the end of all this too. And if not — and even if his net worth is never revealed — Bachelor Nation will always have his hilarious one-liners.