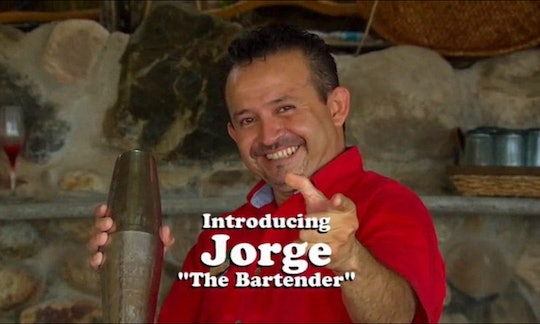 Jorge Is Exploring New Opportunities Outside Of 'Paradise'

All good things must come to an end, as the old saying goes, and that apparently includes our time with the beloved bartender we've come to know on Bachelor Nation. But what is Jorge doing now after Bachelor in Paradise? Jorge Moreno has left the show after two seasons to pursue his own dreams. While he's definitely missed, I'm pretty sure I speak for everyone when I say, "Go do your thing, Jorge!"

Jorge reportedly left the show because he now has his own company called Nayarit Uncovered, which provides tours of Sayulita, Mexico where Paradise is filmed. It should be surprising to exactly no one that Jorge's TripAdvisor reviews are lit. Everyone seems to have given Jorge five out of five stars, with reviews often saying how Jorge made everyone feel more like friends or family rather than out of town tourists. My favorite of these called Jorge "a beauty," and many of them mentioned that he is incredibly knowledgable about the area, and brought his guests to places they would never have otherwise discovered. In addition, Jorge is apparently just as friendly, fun, and personable as he appeared to be on Bachelor in Paradise. Sorry, be right back, have to book a tour with Jorge really quick.

According to an interview with Eater, Jorge was originally just an employee of the hotel, Playa Escondida, and wasn't supposed to be part of the cast. He wasn't even supposed to interact with the contestants, but when they started talking to him, and he started listening, well, the rest is history. "You know, they’re people at a bar: All I did was listen," he said. "And all of a sudden, I-don’t-know-who likes it. Some of the producers? They say, 'Oh no, stay! Listen!' And then everything came up naturally."

Now that Jorge has moved on to bigger and better things, he has now been replaced by Bachelor Nation veteran Wells Adams. Wells started as a contestant on JoJo's season of The Bachelorette and immediately became a fan-favorite. And while he's not competing for anyone's heart, he's still present as the bartender on Bachelor in Paradise. As far as his role goes, Wells said on Ben Higgens and Ashely Ioconetti's podcast Almost Famous that he is first a counselor, second a drink-maker, and third a sunscreen applier. Wells also said that while Jorge is off doing other things, he's definitely not gone for good. Here's hoping that Jorge drops by for a cameo.