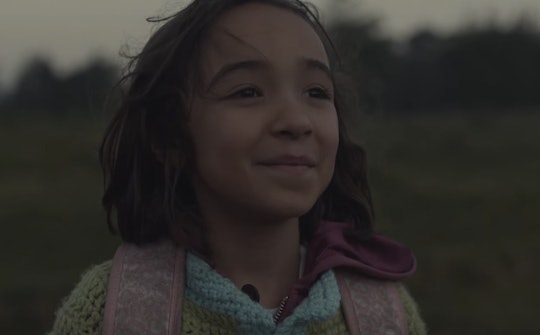 What Is Journey84? The 84 Lumber Ad Broke Its Site

Construction supply company 84 Lumber reportedly couldn't air the entirety of its Super Bowl commercial due to its "controversial" subject — so the company sent viewers to its website, Journey48, to see the commercial's ending. So what is Journey84? It's the website where viewers can finish watching the ad, but so many Super Bowl watchers swarmed to the website on Sunday that it crashed temporarily, according to reports on social media.

The portion of the 84 Lumber ad that aired on Fox on Sunday showed a mother and a daughter embarking on a difficult journey to a new country. During the ad, they crossed rivers, deserts, and noisy cities along the way, and there were clearly difficult moments as they went along. But then, unexpectedly, the ad ended — and 84 Lumber invited viewers to finish watching the commercial online at Journey84.

So many Super Bowl viewers took them up on that offer that the site apparently went down for a little while, leaving people on the edge and curious to see how the mom and daughter's story ended. Luckily, the servers quickly came back up, and the ending of the two's journey was available for everyone to see. Unsurprisingly, the full 84 Lumber story touched many viewers.

The end of the video (on Journey84 and now YouTube) showed the young mother despairing as she finally came to a massive border wall — until she noticed a crack of light just around the corner. Walking towards it, she and her daughter discovered massive doors leading through the wall. The 84 Lumber ad ended with the phrase, "The will to succeed is always welcome here," leaving many viewers a little misty-eyed. (Who, me? I'm not crying, you're crying.)

Rob Schapiro, the chief creative officer at 84 Lumber's ad agency, told Business Insider the video was meant to be patriotic. "[The message behind the ad] is that in this great land of opportunity, 84 Lumber is a company of opportunity," he said. He continued:

This is a conversation that's taking place in homes across America and so 84 Lumber was willing to be part of that conversation, to be relevant and timely ... in Part Two [of the ad] you will see what a beacon of light America is, not just within America but beyond to other countries. We are that beacon of light for people for finding success from hard work and making a contribution.

If you'd like to see the full journey for yourself, check out 84 Lumber's full ad on YouTube or on the Journey84 website. May I suggest keeping a tissue or two handy — you might just cry a few happy tears.