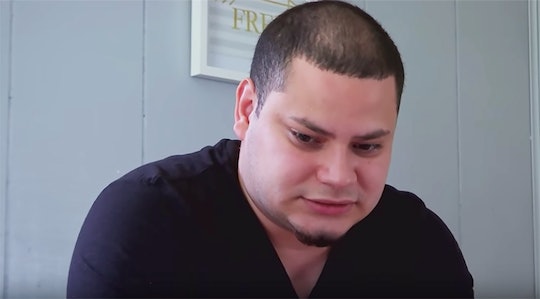 'Teen Mom 2' Star Jo Rivera Has A Job, Thank You Very Much

It's pretty much inevitable that co-parents will argue about child support payments at one point or another. Teen Mom 2 stars Jo Rivera and Kailyn Lowry are no exception to this phenomenon, as they've been fighting about money lately. Given the drama, some fans have questions about Jo's job and why he's suddenly wants Kailyn to pay him child support for their 8-year-old son, Isaac.

Jo fan or not, it's hard to deny he's an awesome dad to his son. Not only did Jo move to Delaware from New Jersey when Kailyn decided to take Isaac to live there with ex-husband Javi Marroquin, but he's usually the voice of reason when drama arises.

Kailyn spoke highly of Jo back in March 2017, stating, according to Us Weekly: “Jo and I hated each others’ guts … we were not good friends [and] we barely coparented. Now we’re best friends — I can tell him anything. I can call him, and we can switch weekends easily or if I need him to grab Isaac from school. We are so good now.”

Sadly, all of this good will came to a screeching halt after Jo reportedly requested over $1,000 a month in child support from Kailyn.

“I should let you know Mr. Rivera thinks … he can get over $1,000 a month from you," Kailyn's lawyer wrote in a text to her, according to People. "He is requesting your financial information and is moving forward on this. You should probably schedule a time to see me ASAP. His new attorney is quite insistent on his client’s rights and your obligation to pay.”

Given Jo's request, some fans assumed he doesn't have job and wants to use Kailyn as his personal ATM machine. The truth, however, is that Jo works as a real estate agent alongside his wife, Vee Torres.

Vee wrote about the couple's real estate ventures in an April 2018 Instagram post, before they got hitched.

"I am currently with Myers Realty and am the listing agent for my fiancé who is a HomeVestors®️ of America, Inc. franchisee," she penned. "I also love Interior Design & DIY projects which I’m hoping to incorporate into my business. I am the property manager of our rental properties with Rivera Property Mngmt, as well."

It looks like Vee is doing incredible work (she just closed on a home six days ago) and Jo still describes himself as a "real estate entrepreneur" on his personal Twitter account.

So, why would Jo request child support if he already has a career? The business owner touched on this question in a tweet to someone who told him to get a job.

"I run two businesses outside of MTV and work 5-7 days a week but I should go get a job? I’m STILL paying child support and you think I shouldn’t fight that?" he penned. "Jan 11th I had to pay almost 2 grand to her. You know nothing and spew out lies. Sounds like you are the trash around here."

He also took aim at Kailyn's claim that she doesn't receive child support from them, sharing a photo of his bank statement to prove it.

Considering the parents share 50/50 custody of Isaac, Jo didn't think it was fair that he had to pay Kailyn child support, especially when she supposedly makes a lot more money than he does.

After some tough fights, Kailyn eventually agreed to resolve the situation. “I paid him back for the full year. Wrote him a check for whatever he paid while we have had 50/50," she told In Touch Weekly. "I paid it in full. Custody never changed."

Additionally, the dad will no longer have to make child support payments or pay for Isaac's health insurance. "In exchange, she didn’t have to reveal her income or do child support calculations, she was relieved of any arrears she would have had to pay, and we all got to move on,” Jo explained to In Touch Weekly.

Jo is happy about the change, tweeting to a fan: "We came to an agreement that works for both of us and I finally have this huge weight off my shoulders after 8 years. @KailLowry we got through it."

All's well that ends well, right? Not only can fans rest assured that Jo is gainfully employed, but now they know everything is OK between him and Kailyn. Talk about a win-win.