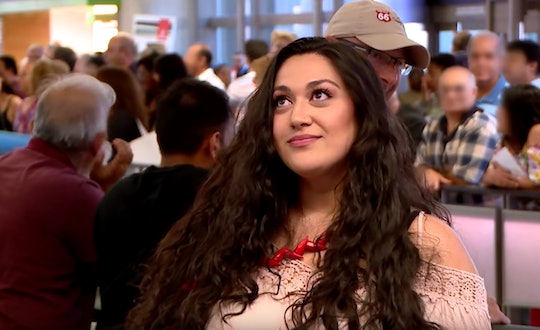 Kalani From '90 Day Fiance' Has Been Getting Major Backlash

One of the standout couples from this season of 90 Day Fiancé is Kalani and Asuelu. The couple met while Kalani was on vacation in Samoa, and the two recently became parents to a baby boy named Oliver. If you’re hoping to get a sneak peek into their lives through social media, you’re probably wondering, what is Kalani’s Instagram on 90 Day Fiancé? Unfortunately, the reality star recently made her Instagram private.

Both Kalani and Asuelo’s Instagram pages have gone private, and according to a report by Newsweek, it might be because Kalani began facing backlash for comments she made on the show. On the first episode of the season, Kalani explained that Asuelo is Samoan, and she first met him when she went to the island on vacation. He worked as a tour guide and activities director at the resort where she was staying and the two began a relationship there.

Before meeting Asuelu, Kalani was a virgin, and she revealed that it was because of her strict upbringing in the Mormon Church. However, when she went back to Samoa to connect with Asuelu for a second time, she said that she fell in love and felt that Asuelu was the one she was waiting for. “In the Mormon faith, you’re taught that you don’t have sex before you’re married,” she said on the show. “But after my second visit to Samoa to see Asuelu, I felt like I found someone I loved and I wanted to experience it with him. So, we did the deed.” When Kalani returned to America, she found out that she was pregnant, and 10 months later, she gave birth to their baby boy.

But Asuelu is not like a typical American man, she explained, noting that he comes from a completely different upbringing. “He grew up in a small fishing village, and he’s never left Samoa,” she said in a confessional on the show. “Like, he comes home and feeds pigs, and feeds chickens, and cracks coconuts. We just come from completely different worlds.” But Kalani’s dad is also Samoan, and he told her on the show that he was hesitant for her to be with a man from his culture, and Kalani explained why. "My dad did have a very hard life, and I know he didn't want us to struggle the way that he did," she said on the show. “So he wanted us with white guys.”

This comment, along with the comment by her father, sparked immediate backlash for Kalani, and she took to her Instagram page to defend her and her father’s comments, while blaming the tone on the show’s editing and production. “Rule of thumb when watching reality TV: if you don’t see it being said, chances are it was spliced together,” she wrote according to In Touch Weekly. “I don’t care if I get ‘in trouble’ for saying that, that was bullsh*t to be put together in such a way, considering the current racial disparities in the world. I don’t care if they edit my sh*t to make me look a certain way — I signed up for the show, but I won’t be quiet if they do that to make my dad look bad.”

It’s safe to say that when people start attacking your family, you would want to shut it down, which is perhaps why Kalani made her social media private. Having your life — including every word and every moment — scrutinized and dissected by the public can’t be easy, so I can’t blame Kalani for shutting herself off the best way she knew how. For now, fans can continue to see her love story with Asuelu unfold on 90 Day Fiance, and see whether or not the two ever make it down the aisle.