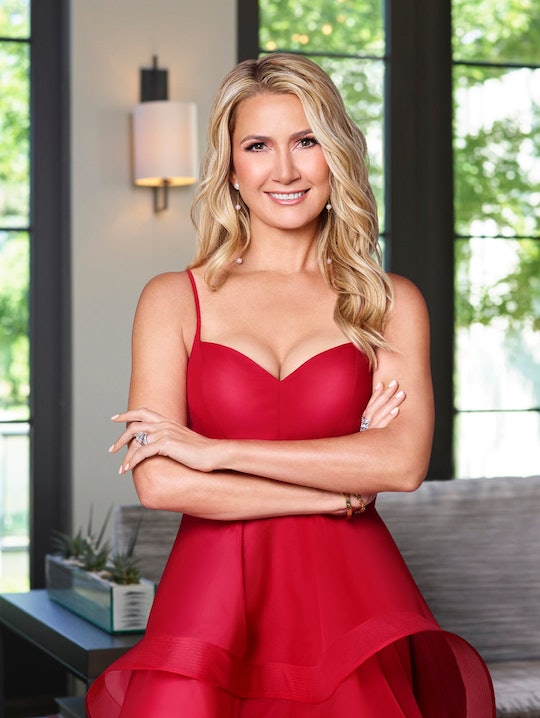 When The Real Housewives of Dallas returns to Bravo for its fourth season on Sept. 4, a new cast member will be joining the show. Kary Brittingham is a pal of D'Andra Simmons, and seems to be taking over the spot Cary Deuber vacated when she shifted into a Friend Of role. But none of that tells viewers much about the new Housewife, or what to expect from her. A look at Kary Brittingham's Instagram, however, can provide some more information.

In Kary's Instagram bio, she describes herself as an official cast member of RHOD, as well as a mother, wife, and jewelry designer who loves to travel. She shares a link to the website for her jewelry line, Kamo by Kary Brittingham, but there isn't much on it just yet. It states that the store will be opening soon and has a form for potential customers to enter their email for updates. There's no merchandise available for purchase, but the backdrop can provide a hint as to what to expect: the jewelry is mostly beaded, with chunky pearls and little charms.

Kary's Instagram is, in many ways, exactly what you'd expect from someone on one of the Real Housewives shows. It's full of bright vacation pictures of blue oceans meeting blue skies; there are friendly group photos and a few selfies. Kary posts pictures with her family and friends on outings, as well as promo for RHOD.

Kary was already friends with D'Andra, according to her Bravo bio, but it appears she's made fast friends with her other co-stars, too. She smooches Stephanie Hollman in one picture, captioning it with multiple pink hearts and writing, "Never in a million years would I have expected becoming so close to a cast member during filming." She called it the "cherry on top" of the experience.

In fact, Kary might have formed a special bond with Stephanie and her longtime bestie Brandi Redmond. In early August, Kary posted a picture with the two of them and dubbed them the "3 amigas." That may be a shoutout to Vicki Gunvalson, Shannon Storms Beador, and Tamra Judge from RHOC, who call themselves by the same name to distinguish their tightknit friendship from the rest of the cast. But even if it's not, it does imply that these three women have become real pals.

In an introductory video for Bravo, Kary explains that she has been married to her husband Eduardo for almost a decade and together they have one daughter, Isabella; Kary also has three children from her previous marriage. Her family makes regular appearances on her Instagram, often with their dog in tow. Based on social media, Kary seems to be happy, close with her kids, and often surrounded by friends. She embraces her love of travel with some enviable vacations. And she's growing closer to her RHOD co-stars.

But the trailer for Season 4 indicates she'll also be stirring up some drama by butting heads with someone on the group trip to Thailand. Kary's time on RHOD might not be quite as peaceful as a scroll through her super chill Instagram page, but fans are probably glad to hear that.