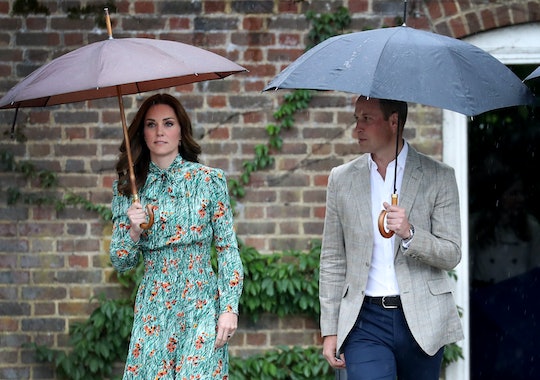 Jokes about Labor Day and expecting women going in labor aside, according to a press releases shared early Monday morning by Kensington Palace, the United Kingdom's Duke and Duchess of Cambridge, Prince William and Kate, are expecting their third child. So, what is Kate Middleton having? Outdated gender binaries are for the birds, but another royal bundle of joy definitely isn't.

For those of you living under a rock, Kate and husband William are already parents twice over. The two welcomed their first child to the world, Prince George of Cambridge, four years ago on July 22, 2013. Then, two years later, Princess Charlotte of Cambridge was born on May 2, 2015. A due date for the couple's third child has not yet been released, but that's not keeping fans of the couple from taking guesses on due dates, names, and the sex of the baby.

Perhaps (read: definitely) more pressing than the sex of the third royal baby-to-be, is Kate Middleton's health. As with her two previous pregnancies, the duchess is suffering from Hyperemesis Gravidarum, or acute morning sickness, according to a report from ABC News. According to the American Pregnancy Association (APA), "Hyperemesis gravidarum is a condition characterized by severe nausea, vomiting, weight loss, and electrolyte disturbance. Mild cases are treated with dietary changes, rest, and antacids. More severe cases often require a stay in the hospital so that the mother can receive fluid and nutrition through an intravenous line (IV)." Kate Middleton was hospitalized for Hyperemesis Gravidarum when she was pregnant with Princess Charlotte, and has reportedly canceled recent engagements because she "was not feeling well."

Details regarding the pregnancy have not been released, which only makes sense: the news is personal, and with the pregnancy complications it would be nothing short of cruel to bombard the family with more inquiries than they're used to. A royal correspondent for the Daily Mail in London claims Kate Middleton is less than 12 weeks pregnant, but was forced to announce the pregnancy due to canceled engagements.

And while gender is a social construct and the sex of the baby-to-be means very little (read: nothing) in terms of who that baby will one day grow up to be, ABC News is reporting that people are already betting on names. "Paddy Power offered 8-to-1 odds on Alice. Also popular was Diana, after Prince William's mother, particularly given the timing of the announcement."

The pregnancy isn't the only "big thing" going on in the Duke and Duchess of Cambridge's life. According to ABC News, the beaming parents will be sending Prince George to school for the very first time.