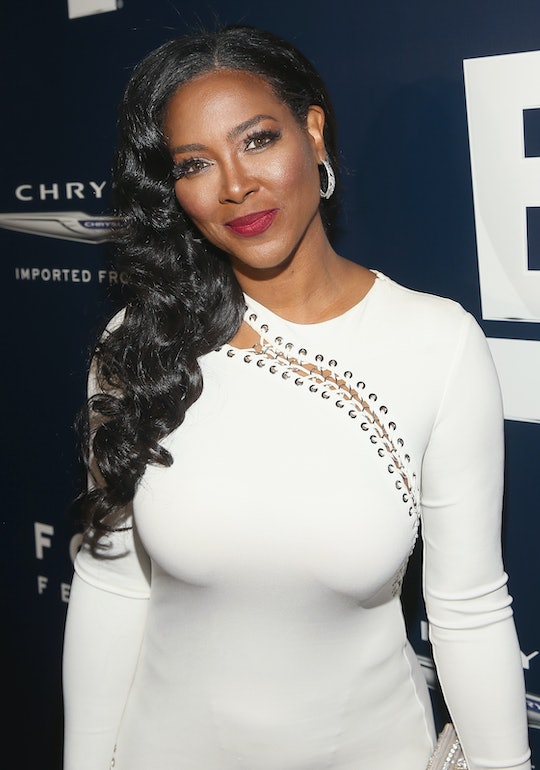 With the return of The Real Housewives of Atlanta, there are a lot of things fans of the show are terribly curious about, not least of which is Kenya Moore's sudden secret husband. Very few details about him have been revealed, so fans may be wondering: what is Kenya Moore's husband's job? Will he show up on the series at all? Does he get along better with the other women than Moore does herself? I'm sorry to tell you that I'm having a hard time finding solid answers to any of these questions, not least of which what the man actually does for a living.

Somehow, Moore kept all the details of her courtship with this mystery man a secret until she was actually married. Last time she appeared on the show she was still dealing with the fallout from her possibly abusive and definitely worrisome ex-boyfriend Matt — best known for showing up where he wasn't wanted, breaking things around Moore's house, and threatening violence. So imagine the world's surprise when it was suddenly revealed that Moore had gotten married without announcing it in advance to a single media outlet or posting a single picture on her social media accounts. I didn't even know she was dating anyone — though I am super-jazzed that Matt is no longer in the picture.

So who is this guy? Well I know that his name is Marc Daly. And to be totally honest, I haven't been able to find out much more about him, much less his actual occupation. In her interviews with People, Moore has described him as a "businessman." Unfortunately, this is an incredibly vague descriptor. I've known party promoters and 7-year-old lemonade stand operators who described themselves as "businessmen." She revealed a teensy bit more about what he actually does every day in an Instagram post.

She posted a photo of herself with a friend, saying that she was at her "hubby's restaurant" which is called SoCo, in the Clinton Hill neighborhood of Brooklyn. From this I'm going to go ahead and infer that Daly is some sort of restauranteur, or perhaps investor in the restaurant business. This is similar to what fellow Atlanta Housewife Cynthia Bailey's ex-husband Peter Thomas used to do. And also like Thomas, it looks like Daly's business is not located in Atlanta, Georgia — or even in the south, for that matter.

Further perusal of Moore's Instagram posts show the happy couple spending lots of time in New York City, which many of you will know is not anywhere near Georgia. Now I have even more questions than when I started. Are they based in Atlanta or in New York? Do they split their time between both? Do they spend months of the year apart? How does this affect their businesses? Did Moore secretly move to New York City without telling anybody?

For what it's worth, all of the details that Moore has been kind enough to share about the love of her life have been very positive. She describes him as the person who really knows her, while people who've only seen her on TV think of her just as a reality star. She also said that she felt the "earth move" after their first date. As for why she kept him a secret for so long? She told People, "He didn’t sign up for this world, I did." She continued by saying:

Every time someone has been associated with me, they attack that person – immediately going after them, trying to bring them down and saying crazy things. They tear people apart. And so for [Marc], he was like, ‘This is about me and you — it’s not about me or you.’ He just wanted it to be about our pure love and not about him.

Hopefully we'll get to learn a little bit more about the man in Moore's life as the season progresses. Until then, I'll just have to sit tight with what I've got.