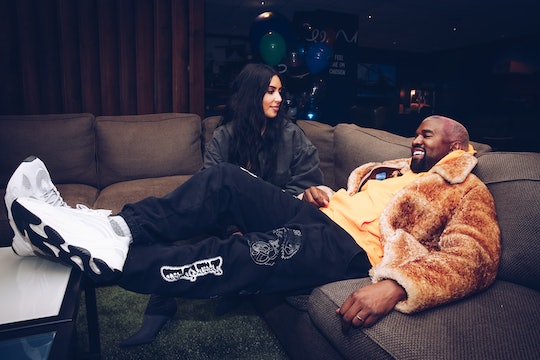 Kim Kardashian revealed over the weekend that her fourth child (and second through surrogate) with husband Kanye West is due in May. And since she has just one more month left to prepare for the baby's arrival, it makes sense she's thinking of names for her baby. But what is Kim Kardashian naming her fourth baby? Well, in a new interview, she revealed that she might have discussed some names already with her family.

The three oldest Kardashian sisters — Kourtney, Kim, and Khloé — appeared on Jimmy Kimmel Live! on Monday night to promote the newest season of Keeping Up With The Kardashians, which premiered on Sunday, and to talk about their very exciting lives. As everyone knows, there is always a lot happening in the lives of the Kardashian sisters, especially Kim.

One of the best things happening in Kim's life is the upcoming birth of her son, who is due next month. So of course, the show's host, Jimmy Kimmel, had plenty of questions to ask her about her baby-to-be, asking her the one thing on everyone's mind — has she picked out a name for him yet?

Kim played coy about her son's name, saying that she has been doing research on Armenian names to pay tribute to her late father, Robert Kardashian Sr. "I was truthfully just thinking about naming him Rob. My brother," Kim said on the show. "But then it's kind of like, North, Saint, Chicago, Rob. But I was really feeling that."

Although the name might stick out among his fellow siblings, it really would be an incredible tribute to Kim's family.

Although this name might be sticking out to Kim, there are a few steps that she has to go through before she decides on one name to name her baby for the rest of their lives. As Kim told Kimmel, according to E! News:

I definitely take a family survey. But it's usually after the baby's born, or we're trying to figure out what the baby looks like. I usually go three or four days nameless until I feel that it really connects.

So, it's likely that Kim won't really have the perfect name for her little boy until he's born. But the parents don't have anything to worry about — they've been pretty successful when it comes to picking out the names for their three children.

Family isn't the only thing they take into consideration when it comes to names. In an interview with GQ in 2014, Kim revealed how she and Kanye were able to settle on their oldest daughter's name, according to HuffPost, thanks to the help of Vogue editor, Anna Wintour. "She told us, 'North is a genius name.' Kanye and I looked at one another and just laughed," Kim said. "I guess at that point it sort of stuck."

Kim reportedly named her 3-year-old son, Saint, because he was "a blessing" after her incredibly rough second pregnancy, according to E! News. And Kim revealed that she named her third child, Chicago, last year, as a tribute to her husband's hometown of Chicago, Illinois, according to Bravo.

"Obviously, because he's from Chicago," Kim explained during an appearance on The Ellen DeGeneres Show last April. "But that is a place that made him, a place that he remembers his family from."

Every single name that Kim and Kanye have picked for their children has been so meaningful to them. So, rest assured that baby number four's name will be just as special. But fans shouldn't be alarmed if they wait just a few days after their baby's birth to announce the name to fans — perfection takes time.