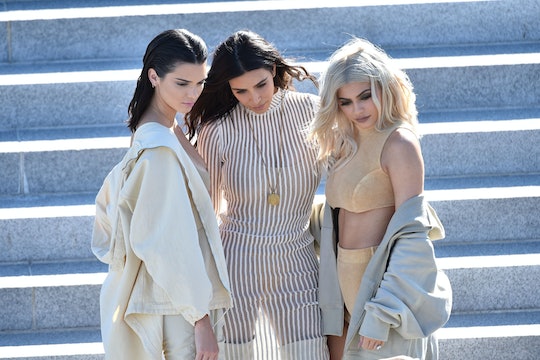 How Much Is Kim Kardashian's New Baby Worth?

All babies are priceless, but there is no denying that Kim Kardashian's new baby girl is going to have a little more pocket money than her peers if the Kardashian-West baby's net worth is to believed. The January 16 statement put out by Kim Kardashian on her website announced the January 15 birth of her third child by surrogate. In the post "She's Here / We're So In Love," Kim wrote that "Kanye and I are happy to announce the arrival of our healthy, beautiful baby girl. We are incredibly grateful to our surrogate who made our dreams come true with the greatest gift one could give and to our wonderful doctors and nurses for their special care." The statement ended with a note that "North and Saint are especially thrilled to welcome their baby sister." Part of what makes this particular baby arrival so warm and exciting is the gratitude shown by the parents, and the acknowledgment that not every parent can afford to have a child via surrogacy.

For those playing along at home, the net worth of the third Kardashian-West child has been hotly debated. The precise size of the Kardashian empire is difficult to gauge, but we do know that this tight-knit clan is devoted to ensuring the best for their kids down the line, and that Kim Kardashian — like her father — is a keen businessman. So how much is Kim's new daughter worth on paper? We delved into the question and, yes, it's millions.

Kim Kardashian's father, Robert Kardashian, was a true entrepreneur, and had an estimated net worth of $30 million in 2003, some of which of course passed on to his children. But if there is one thing the Kardashians know how to do, it's grow that nest egg. Kim Kardashian was one of the first celebrities to capitalize on the rapidly growing app economy (which is estimated to grow to a total $6.3 billion by 2021). Her app, Kim Kim Kardashian: Hollywood, makes its revenue from in-app purchases, and earned a whopping $71.8 million in 2015 alone, per Fortune. Kim's husband Kanye West is worth an estimated $145 million according to InStyle, and has climbed as high as #20 on the Forbes richest celebrity list. The couple sold their Bel-Air mansion for $17.8 million in 2017, after buying for $9 million several years earlier, and investing somewhere around $2 million in renovations. That means they made around $6.8 million just on flipping the house. Forbes estimates Kim's 2017 earnings at around $45 million, meanwhile, "lead" characters in the reality show Keeping Up With The Kardashians made a reported $500,000 per episode (wow). The revenue stream is strong: Time estimates Kim's net worth at $175 million.

So it's likely that Kanye West and Kim Kardashian have a combined net worth of about $320 million. We also know that Kim is not averse to spending money (on, say, Hermes handbags that retail for as much as $150,000). That doesn't mean that they *waste* money, but that their liquidity is high. And Kim certainly knows what to spend money on to make it count: the average cost of surrogacy is somewhere between $90,000 and $130,000, according to West Coast Surrogacy.

Many celebrity parents have chosen not to burden their children with a trust fund, finding that the soft safety net of bottomless wealth can hurt their development. Kanye and Kim are not in that camp: the couple told Hollywood Life that they set up a $10 million trust fund for North West, accessible when she turns 21 in 2033. Calculating the effects of inflation and interest (I chose the reasonable rate of 3.8%) on that sum over 21 years, the lump sum grows to about $10.4 million. We can assume that Kanye and Kim will do the same for Saint West and their newest child. And of course, if their new daughter appears in episodes of the TV show, she could begin to annex her net worth before she turns 21.

So, our best guess is that just by being born, Kim and Kanye's youngest is worth about $10 million — and that's before the internet melts down from the heat of this Kardashian baby season.

More Like This
New Barney Docuseries Will Dive Into The Dark Side Of The Beloved '90s Kids' Show
Every State’s Favorite Halloween Movie For Kids In 2022
You Can Stay At A ‘Hocus Pocus’ House On Airbnb — And It’s In Salem!
10 Kid-Friendly Halloween Episodes From TV Shows Your Little Vampire Already Loves