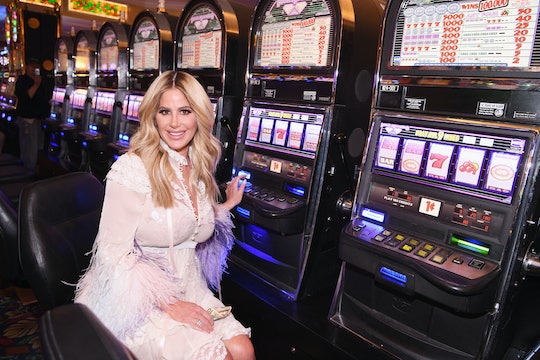 This Is How Much Kim Zolciak-Biermann Is Worth

The return of Kim Zolciak-Biermann this year on Real Housewives of Atlanta means that it's going to be one very dramatic season. She seems to have a lot of time on her hands to stir the pot among the ladies, so it's no crime to wonder what she does for work and what Kim Zolciak-Biermann's net worth actually is. Especially since she's pretty quick to point out everyone else's financial status.

According to the Heavy, Kim and husband Kroy's net worth is just about $1.7 million. Kroy is a pro-football player and spent most of his career with the Atlanta Falcons, however, after a brief stint with the Buffalo Bills, he's currently a free agent and full-time dad at the moment. So Kim is currently the main breadwinner for the time being.

After rising to fame from RHOA, Kim and Kroy are also the stars of their own spinoff show, Don't Be Tardy, which is currently in its fifth season. Kim was also on Dancing With The Stars for a short time back in 2015. But that's not her only source of income. Much like fellow housewives Erika Jayne from Real Housewives of Beverly Hills and RHONY's Luann de Lesseps, Zolciak has also explored a music career. (OK, to be fair, Kim and Luann have nothing on Jayne's professional career, but the Real Housewives franchise does seem to open recording studio doors for the women.)

In 2008, Kim released a dance track called "Tardy For The Party," which led to a lawsuit. RHOA castmate Kandi alleged that she and songwriter Rodney "Don Vito" Richard actually wrote the track. (RHOA castmate Phaedra Parks represented her in the suit.) Kandi sought to stop Kim from selling the single or licensing it in any way, though Kim eventually won. Kandi, a Grammy winner, told Us Weekly back in 2013:

It's not about the money. I'm doing great otherwise. It's all just silly. It's not a big deal to me. I've got my daughter and my fiancé and am working on new music and a Broadway show that I will star in! So it's all good.

After apparently giving up on music, Kim launched a skincare and fragrance line called Kashmere Kollection.

So if anything, Kim keeps very busy. But fans know that her real job is being the drama-mama on RHOA. In fact, fellow castmate Kenya Moore recently told Us Weekly in an interview that, "no one is excited for Kim to be back on the show.” Maybe because she's already mired in a huge fight with NeNe Leakes, who is also returning this season. So it will be interesting to see how that dynamic plays out throughout the upcoming season.

Once upon a time, the two were close enough that they were going to get their own spinoff show together (it never came to fruition, though Bravo explored the idea), but now they really don't get along.

Suffice to say, it will definitely not be boring with Kim back in the clique. But then again, when has The Real Housewives of Atlanta ever been boring? Regardless, I'm definitely looking forward to catching up with these ladies and seeing what kind of drama they'll get up to in the weeks and months to come.

The Real Housewives of Atlanta kicks off its tenth season on Sunday, Nov. 5. starting at 8 p.m. EST on Bravo. You won't want to miss it!