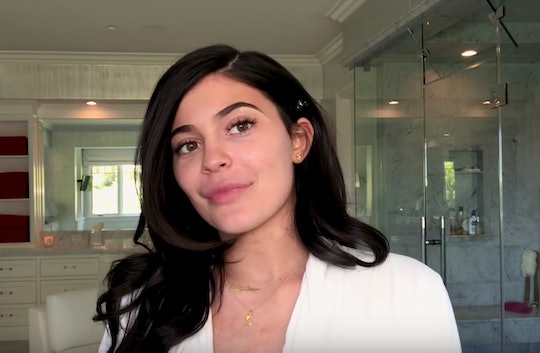 Kylie Jenner Just Got A New Tattoo & Obvi, It's All About Her Daughter Stormi

Kylie Jenner might love tattoos just as much as she loves makeup. On Thursday night, she and her best friend, Stassie Karanikolaou, debuted their newest tattoos on her Instagram Story. This likely had many people wondering: what exactly is Kylie Jenner's new tattoo? The makeup mogul's new ink is a simple and touching tribute to her 1-year-old daughter, Stormi.

Kylie Jenner's devotion to her daughter with her boyfriend, Travis Scott, is incredibly clear to any of her followers. She is always talking about her little girl and sharing the sweetest photos and videos of her. So, it makes sense that she would want to make this permanent by tattooing her daughter's name on her body. And on Thursday, Jenner took to her Instagram Story where she showed off her "STORMI" tattoo in tiny black lettering, located on her tricep, according to People.

Jenner's tattoo is small, subtle, but still prominent enough to show the rest of the world her devotion to her daughter. But she wasn't the only person to get this tattoo. Her BFF, Karanikolaou, also has a matching one, according to ELLE, which is pretty cool. Jenner's friends clearly love Stormi a lot, and this tattoo makes that known. In Jenner's Instagram Story, both of their tattoos were finally seen for the first time in motion.

Jenner and Karanikolaou reportedly got these tattoos at Scott's birthday party earlier this month, according to Page Six. Celebrity tattoo artist, JonBoy, was on hand to give out tattoos at the super lavish bash thrown by Jenner herself, according to People. In snaps from the party, Jenner could be seen getting a tattoo, according to Page Six, but it was a little unclear what she had gotten tattooed on her. But thanks to her new little Instagram Story, it's now obvious.

It's super sweet that Jenner's BFF decided to match her, too. Karanikolaou and Jenner go way back; the friends first met through mutual friends when they were teenagers and have remained super close ever since. She even made an appearance in Jenner's pregnancy video diary to Stormi, which was published on the same day that she announced that she had given birth to a daughter. In the video, Karanikolaou described her reaction to hearing that Jenner was pregnant for the first time. "Obviously, I just started crying," she said. "I was so happy. I was so proud of her. I knew this is what she wanted ever since she turned 15."

"I love you and I love your mom and she is going to take amazing care of you," she told Stormi in the video.

Since she felt this strongly about Stormi and Jenner more than a year ago, it makes sense why she would get Stormi's name tattooed on her, too.

This is not Jenner's first tattoo. In fact, including new one, she has seven tattoos in total, according to Glamour. In addition to her Stormi tat, she also has a tiny red heart on her upper arm, a tattoo that says sanity (spelled out phonetically) on her hip, her grandma's name on her arm, the letter "M" on the inside of her finger, a butterfly on the back of her ankle, and L.A. tattooed on her inner ankle.

Jenner's newest tattoo, however, is the first one dedicated to her daughter.