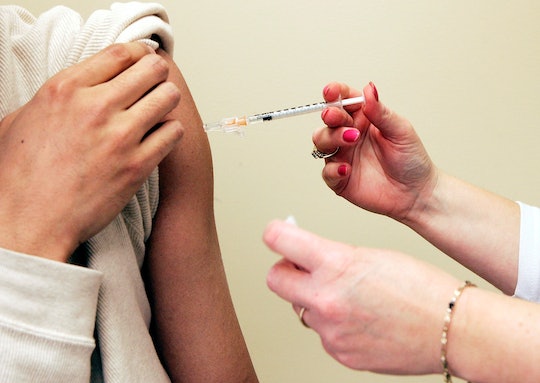 Here's What You Need To Know About The Flesh-Eating Virus, Leishmaniasis

The flesh-eating virus known as leishmaniasis is the second-deadliest parasitic infection in the world, behind malaria, according to the American Council on Science and Health. The disease affects hundreds of thousands of people around the world, and can lead to death if left untreated. But what is leishmaniasis? The flesh-eating virus is rare in the United States, but cases seem to be on the rise. Now doctors are rushing to develop a vaccine.

According to Newsweek, scientists from the Georgia Institute of Technology are one step closer to creating a vaccine that would protect people against leishmaniasis. Their research, published Wednesday in ACS science, found that 12 vaccinated mice injected with virus-like particles didn't get leishmaniasis, while the 12 unvaccinated mice did develop the flesh-eating disease. Although the findings are groundbreaking, the scientists understand that more research needs to be done on how this vaccine would work in humans, Newsweek reported.

But a vaccine couldn't come too soon. The World Health Organization estimates that at least 700,000 to one million new cases of leishmaniasis occur each year, although only a small fraction of people infected with the parasite will develop the disease. There are also an estimated 20,000 to 30,000 deaths from leishmaniasis each year, according to WHO.

Leishmaniasis is a infectious, flesh-eating disease caused by Leishmania protozoa, a tiny one-celled parasite found in parts of the tropics, subtropics, and southern Europe. According to WHO, the climate-sensitive flesh-eating disease has three types: Cutaneous, visceral, and mucocutaneous. Cutaneous leishmaniasis is the most common form of the condition, and is categorized by ulcers and skin sores on exposed body parts, resulting in lifelong scars and serious disability. Mucocutaneous leishmaniasis, which is not as common, causes partial or total loss of mucous membranes in the mouth, throat, and nose. Visceral leishmaniasis, also known as kala-aza, is the most deadly version of the disease; according to WHO, it causes weight loss, fever, anemia, and enlarged liver and spleen, and, in most cases, is fatal if left untreated. Other symptoms may also include problems breathing; night sweats; scaly, dark, gray, or ashen skin; and thinning hair.

How Is Leishmaniasis Spread?

According to the U.S. Centers for Disease Control and Prevention, leishmaniasis is spread by the bite of an infected female phlebotomine sand fly, which is about one-third the size of an average mosquito. WHO reports that major risk factors for contracting leishmaniasis include changes in the environment, climate change, malnutrition, poor sanitary conditions that increase sand fly breeding and resting sites, and population mobility. People living with HIV also face a higher chance of developing full-blown leishmaniasis, according to the global health organization.

How Do You Treat Leishmaniasis?

Your doctor will run a variety of tests, including a blood panel as well as skin, liver, and lymph node biopsies, to diagnose if you have leishmaniasis. According to the U.S. National Library of Medicine, your doctor will start you on medication to treat the disease, and may recommend reconstructive surgery to address any damage caused by skin sores. Early detection and proper treatment can prevent death or serious complications, such as hemorrhaging, from leishmaniasis, so it's important to see your doctor right away at the first sign of symptoms.

What Should You Do To Protect Yourself?

On an individual level, taking steps to avoid being bitten by a sand fly is important to protecting yourself against leishmaniasis. Some ways to prevent the spread of the flesh-eating virus include wearing protective clothing, wearing insect repellent, and using window screens. People who live in high-risk areas for leishmaniasis should also put a fine mesh netting around their bed to prevent sand fly bites. But public health officials also play a role in leishmaniasis prevention; WHO recommends more effective disease surveillance, environmental control, and community partnerships to help understand the virus, decrease the sand fly population, and education the public on prevention and treatment.

Leishmaniasis is a frightening disease that can be deadly if left untreated. Although a vaccine would help reduce rates of infection by drastic numbers, it's still in the early stages of development. If public health officials want to keep the flesh-eating virus from spreading in the United States, it's imperative they take certain measures to raise awareness and promote more research.