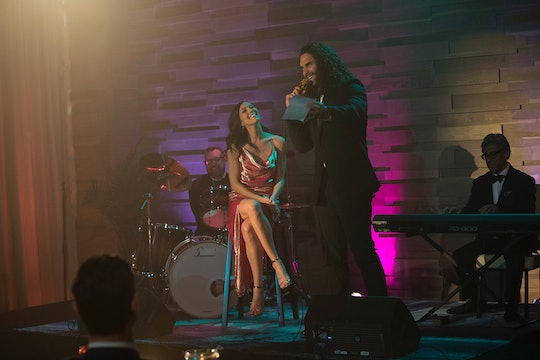 Leo Has Been Very Busy Since 'The Bachelorette'

As fascinating as it is to watch the contestants on The Bachelorette during the show, it's no wonder that people are curious about what happens to them after the show finishes airing. Take Leo, for example, the long-haired stuntman who seems on the verge of quietly stealing Becca's heart from the other men. So, what is Leo doing after The Bachelorette? The actor and construction worker has been busy beefing up his IMDB page.

Unlike many contestants, Leo is a Los Angeles native. The 31-year-old "is a successful stuntman in TV, movies and stage shows," Leo's ABC biography says. "When he's not taking a punch, he works for his family construction business. Leo's been growing his hair for 10 years and prefers the 'messy bun' look."

Leo didn't hesitate to show off his messy bun look as soon as he entered the house, but he hasn't talked much about his stuntman or construction work. Instead, Leo's been providing snarky commentary in confessionals and handling group date challenges like a pro, which is why I like him.

While Garrett won the first impression rose in the premiere, he was not Becca's first Bachelorette kiss. "First kiss was Leo," Becca told Us Weekly. "Which no one saw!" The premiere seems like a lifetime ago; the season is whizzing by now. The contestants have already taken small trips to Utah, Nevada, and now to Virginia. Soon they'll be going across the world and Becca's decisions will get harder and harder. The Bachelorette finale airs August 7, so the countdown is beginning already.

So since filming is long since over, what is Leo doing now? According to Leandro Dottavio's (that's Leo's full name) IMDb page, he's had Hollywood roles since 2011. He had extra parts in shows like American Horror Story and SMILF, and he has nine stuntman credits including the 2011 film Moneyball. So far he has one acting credit for 2018, the role of Bruno in a TV series called Black Jesus. Leo also has two stuntman credits this year, for the shows 9-1-1 and Love. Oh, and Leo has two 2018 credits as "himself": The Bachelorette (duh) and a stuntman documentary called Stuntwoman: The Untold Hollywood Story that's apparently in post-production.

So, Leo's clearly been busy! These may have been things he's filmed in 2017 or earlier in the year, but it's clear he's hustling in Los Angeles. If Leo's Instagram is any indication, he's hanging out next to trailers, snuggling up with his dog, and appearing on Jimmy Fallon (albeit, a clip of him does). Fans don't really know details but from the looks of it, he's living his best life.

Of course, as a Bachelor alum, Leo has options for what to do if he wants to stay on the franchise. He can try to be the next Bachelor, or go on next season of Bachelor in Paradise. Seeing as the latter is easier, he may go for that. The initial cast of Season 5 of Bachelor in Paradise dropped, and Leo is not among it — but that's because he's still on the show, and ABC would never spoil themselves.

I hope Leo goes far in the competition, but I'm not sure if he'll be the one to win Becca's heart. If that's the case, I think he'd have a lot of fun on Paradise. There is less pressure, as contestants date each other as opposed to trying to date a lead, and you're on a Mexican resort the whole time! Leo's post-Bachelorette life is still up-in-the-air, but hopefully in between acting gigs he takes some time to find love on Paradise.