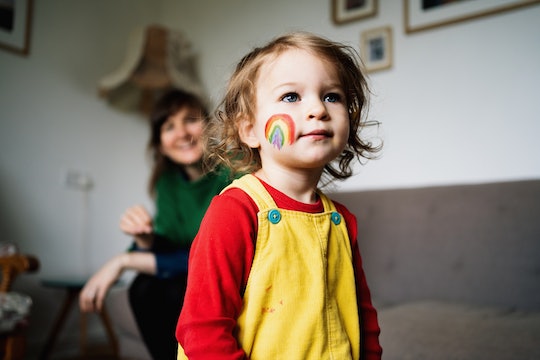 Here's Everything You Need To Know About LGBTQ+ History Month

You know all about Pride Month, which happens every June — but what is LGBTQ+ History Month? Spanning the entire month of October, it's both a celebration of 31 icons in the LGBTQ+ communities and a month-long invitation to learn more about the history and the people who have been influential in the ongoing fight for equality in the gay, lesbian, bisexual, and transgender populations.

Considering the month has the word "history" in the title, it's no surprise that the month was started by an educator. After a lesson on the Holocaust, 29-year-old Missouri high school teacher Rodney Wilson came out to his class, telling them that he could have been killed for being gay had he lived during that time, according to HuffPost. Wilson felt there needed to be a month commemorating LGBTQ+ history, as LGBTQ+ History Month. It falls in October because school is in-session without any big breaks, and because it coincides with National Coming Out Day on Oct. 11.

While learning history is crucial, it's not the only thing you can do. "Teaching about LGBTQ+ history is one of several protective factors — the characteristics, conditions, and behaviors that directly improve positive health outcomes or reduce the effects of stressful life events — that affirm the identities of LGBTQ+ youth," Armonté Butler, Senior Program Manager for LGBTQ Health & Rights at Advocates for Youth, tells Romper in an email. "Other protective factors include acceptance and support from parents and peers and the inclusion of Gender and Sexuality Alliances (formerly known as Gay-Straight Alliances) at schools."

For each day in October, a stand-out person who identifies as gay, lesbian, bi, or transgender will be celebrated on the LGBT History Month website (and on their accompanying Equality Forum Instagram page) with a bio, pictures, videos, and other resources. This year's icons (who are nominated, then selected by two LGBTQ History Month co-chairs) include rapper Lil Nas X, actor Kate McKinnon, and poet Mary Oliver among other inspiring people who may be dead or living but who are selected either for their achievements in their field, or for their contribution to LGBTQ+ civil rights.

In a perfect world, all kids would learn this important history in the classroom, but unfortunately only four states (California, Colorado, New Jersey, and Illinois) have LGBTQ+ history mandated as part of their curriculum, per EdWeek. While this doesn't mean that if you don't live in one of the aforementioned states, your child's school won't touch on this history, it does mean that you may want to supplement some information on the topic at home, where you get to share your own values and make a family plan for how to be strong allies (if no one identifies as LGBTQ+) or how you're going to help someone who is LGBTQ+ thrive.

"Individuals can support LGBTQ+ youth this month, and every month, by centering our voices and advocating with us, not for us," Butler says. He adds that he spearheads the Queer and Gender Equity Project, which provides, "a variety of education, healthcare, and community-based organizations with education, research, professional training, and technical assistance in efforts of increasing their support for LGBTQ youth of color and youth living with HIV."

If you need ideas of how to get the ball rolling on your own advocacy, Butler suggests that parents and students ask their states to require LGBTQ+ history in their school’s curriculum, advocate for LGBTQ-inclusive sex education and ask for "state and local education agencies to opt-in and include questions about gender expression and transgender status on their standard Youth Risk Behavior Surveys (YRBS)." You can also make sure that there is a Gender and Sexuality Alliance within your child's school system and your local community center. And remember, while the month ends after 31 days, you can consider it a jumping off point for your own advocacy and allyship, which has no end-date.