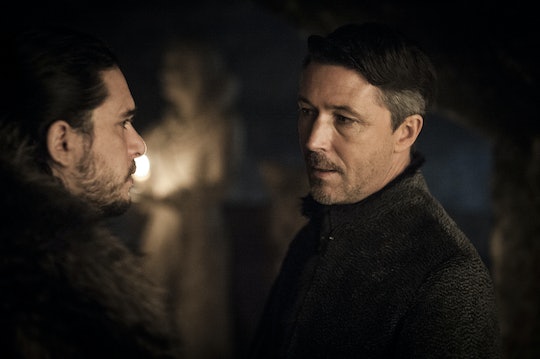 Westeros' resident creeper Littlefinger, also know as Lord Petyr Baelish, is still creeping on Sansa and every one knows it because he's not the least bit subtle. So what is Littlefinger up to on Game of Thrones? Is he really just in love with Sansa like he claims or does he have some other ulterior motives going on? Knowing Littlefinger, he has some kind of plan in motion.

During "Stormborn," Littlefinger told Jon he's not his enemy and then revealed what fans already knew. "I love Sansa, as I loved her mother," he said before Jon rightly threw him up against the wall.

It's clear the only reason Littlefinger has stuck around Winterfell for so long is because he wants to be with Sansa, despite the fact that she's expertly thwarted all his advances thus far, excluding that kiss they shared back when they were at the Eyrie. There's no doubt Littlefinger's feelings for Sansa are real, no matter how creepy they are, but it also seems fair to suspect that he sees being with Sansa as a step to power.

With Jon now gone from Winterfell, Sansa is the interim Queen of the North. It wouldn't be surprising if Littlefinger took Jon's absence as an opportunity to get into Sansa's ear and try to convince her that she should remain Queen of the North and usurp power from Jon completely.

It's something Littlefinger hinted at during the Season 6 finale and when he asked Sansa what would make her happy he certainly seemed to think the answer was power. Ultimately, Littlefinger's end goal is to probably get rid of Jon, make Sansa the official Queen of the North, and then somehow convince her to marry him so he can be her King. Unfortunately for him, it's unlikely this will happen.

Even if Littlefinger somehow convinces Sansa to turn her back on Jon, there's no way Brienne will just sit idly by and watch Sansa marry another man with ill intentions. Additionally, Arya is on her way home and though it may be wishful thinking, it certainly seems like she'll be getting there rather soon. Arya definitely won't be on Team Littlefinger and if Sansa tries to cut Jon out, Arya will be the first to shut that down. Arya and Jon have always had a close relationship, unlike he and Sansa, and Arya won't be easily swayed to betray her brother.

So no matter what Littlefinger's planning, if it has anything to do with getting Sansa on his side, he still has plenty of obstacles to overcome.