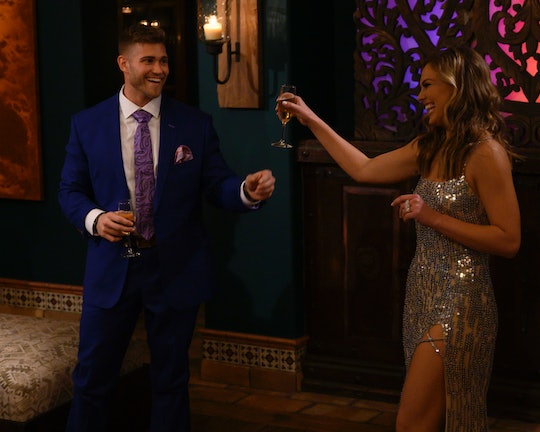 As I was scrolling through headshots of The Bachelorette Hannah's potential suitors one caught my eye. Was he a cowboy? A model? A personal trainer? I had to know — what is Luke P.'s job? He looks like he could do any of the jobs I just mentioned, and any answer would be fine with me (and probably Hannah, too).

Brace yourselves, because you're not going to be ready for this answer. Luke P. is an import/export manager from Gainesville, Georgia. I said you wouldn't be ready for the answer. I made no promises that it would be exciting or that you would know what it meant. Don't worry, I didn't know either, but I found out. An import/export manager "manages the import/export process, and ensures compliance with U.S. and foreign government laws and regulations." Honestly, can't even try to guess what that entails because I don't know what industry he works in. According to Salary.com the top three industries that need import/export managers are Transportation, Retail & Wholesale, and MFG Durable (Goods).

But let's just talk about Luke P. not his job — because he seems like a perfect potential husband for Hannah, no matter what he does for a living. I mean, first of all, look at him. He would definitely belong on a beauty queen's arm, right? But let's not be too shallow because Hannah told Ellen Degeneres she's looking for a "good human" with a good heart.

Luke P. checks off that box for sure. The first thing he wants Bachelor Nation to know about him is that he's a "good Christian boy." According to Hannah's Instagram bio she "loves Jesus with my whole heart." So, the two southerners have no problem where religious compatibility is concerned. His Instagram account is currently locked, but the bio is visible and reads in part, "Jesus + Nothing = Everything."

When considering mates for Hannah the next topic to consider is sports because...Roll Tide! I barely know what I just typed but Hannah says it every other sentence and I know it's a sports and University of Alabama reference. So, does Luke P. like sports?

Of course he does. His bio tells fans he "loves team sports" in the first sentence and Tim Tebow is his hero. He also says in the bio that his worst fear on a date is bad gas. Honestly, I don't know which confession is more vulnerable.

Vulnerability is something else Hannah is looking for in a man. She told Degeneres she's going to show suitors the good and bad parts of herself, and she expects the guys to return the favor and show her who they really are.

As for marriage, people like to challenge Hannah because she's only 24. But she was not fazed when Degeneres asked if she was ready. "I'm so ready...I know I'm young but I would not have gone on the show if I hadn't really thought about what was at the end of this."

For what it's worth, Luke P. is also 24 and says he's ready for marriage too. According to his bio, in college he decided that "when he dates, it's for marriage." It's a little early to call it but I have a feeling this guy is going to go far this season.