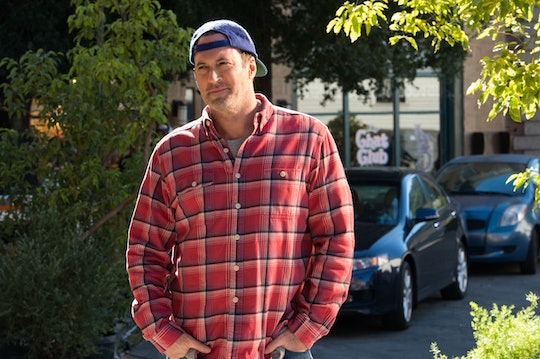 What Is Luke's Wi-Fi Password On The 'Gilmore Girls' Revival? His Patrons Deserve To Know

There is nothing I love more than a good mystery and Netflix's Gilmore Girls: A Year in the Life definitely left us with a whopper. No, I'm not referring to that mystery — you know, the one involving the identity of Rory's baby daddy. I'm talking about something much more illuminating than that: I want to get to the bottom of what Luke's Wi-Fi password is on the Gilmore Girls revival. Seriously, we heard him pass out countless fake passwords to his diner patrons, but it was never stated what it actually was and now I'm dying to get to the bottom of it. (Yes, these are the things that plague my mind throughout my work day. No judgements, please.)

Sure, there were a lot of other, arguably more important, story arcs going on throughout the four-part revival series, but you can't tell me that figuring out Luke's password wouldn't be interesting. Because then you wouldn't just know his password — you'd know more about Luke himself and what goes on underneath that baseball cap and flannel attire. Jess said that it took him six months to learn the password. I'm determined to find my answer a lot sooner than that. So without further adieu, here are my own personal predictions about what it could (and should) be. So godspeed and may the bandwidth ever be in your favor!

What? Luke could totally be a Beatles fan, right?

His second favorite pastime aside from yelling at Taylor. Speaking of which...

A sassy Luke is my favorite Luke, after all.

This is honestly just me hoping that Luke is as big of a fan of puns as I am.

Sure, it's super obvious and in no way creative, but maybe that's the pure genius of it.

Because why the heck not?

Obviously, there's a good chance Lorelai helped him install the Wi-Fi in the diner, so odds are she also helped create the password as well, whether Luke realized it or not. This seems like a very Lorelai-type thing to do to her now-husband. But then again, deep down Luke is an old softie and may have come up with this gem on his own.

Diehard fans will understand the meaning of this.

As you can see, there are a lot of options to choose from. And while I don't expect to get an actual answer from this (unless it gets revealed in a potential Season 2), I certainly hope that one of these options is accurate.