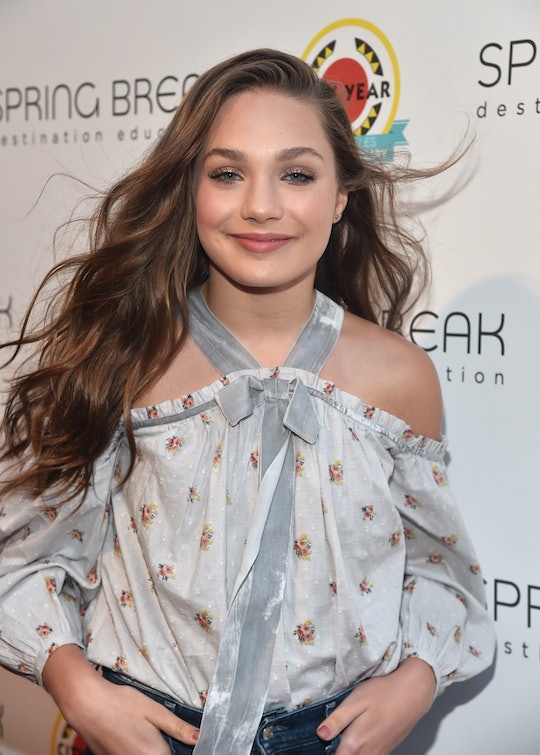 You’ve seen her on Lifetime's hit series Dance Moms and starring in Sia’s music videos like “Chandelier” and “Elastic Heart,” but fans might be wondering what exactly is Maddie Zeigler doing now. Turns out the 14-year-old dancer has been up to a lot over the past few years. This year alone, she’s published a New York Times bestseller and is expected to make her debut in a feature film later this month.

Earlier this year, Zeigler published her first book, entitled The Maddie Diaries: A Memoir, making its way on the coveted New York Times bestseller list in just one short week. She quickly took to Twitter to celebrate the exciting milestone in her very accomplished career (an especially major moment considering that she's still a young teenager). "Couldn't be more excited & grateful to announce that #TheMaddieDiaries is a NYT best seller!” she wrote back in March. “Thanks to ALL my fans for making this happen.”

As Refinery 29 reported, Zeigler’s memoir is partly about the craziness of her life at such a young age and how Sia taught her to take a moment to breathe every once and awhile.

“Before I met [Sia], I would say yes to a lot of things I didn’t want to do ... I thought I had to — I didn’t want to disappoint anyone,” she wrote in her book. “I’d be overwhelmed by the amount of work on my plate. Sia always tells me you have to have time off, step back, and appreciate the moment.”

Not long after her book was published, news broke that Zeigler — who is the older sister of Mackenzie Ziegler, also a star on Dance Moms — would be making her big screen debut as Christina in the movie The Book of Henry, which premieres next week on June 16. According to Teen Vogue, she plays "the next-door neighbor of gifted 12-year-old Henry Carpenter and stepdaughter of the Police Commissioner."

In the drama — which also stars Naomi Watts, Dean Norris, Jacob Tremblay, and Jaeden Lieberher — Zeigler's character needs protection from an abusive stepfather and the boy "writes down a plot to murder" him in a book, which his mom later finds, according to 2Paragraphs.

In recent years, Zeigler was also a judge on So You Think You Can Dance: The Next Generation, making her the youngest judge in the show's history, according to Teen Vogue. She also designed her own clothing line called "Maddie" — all while she was on tour with Sia, as Refinery 29 reported.

At the ripe age of 14, Zeigler has had more career titles than you can count on one hand — and it doesn't appear that she's slowing down anytime soon.

More Like This
Nick Cannon Gives In To Chaos In A Cute New TikTok With His Oldest Kids
Freeze! The Single From The New 'Bluey' Album Just Dropped
Julia Fox’s Apartment Tour Is Peak Mom Realness
Kate Middleton Is Not Expecting This Classic Valentine’s Day Gift From Prince William
What Parents Are Talking About — Delivered Straight To Your Inbox