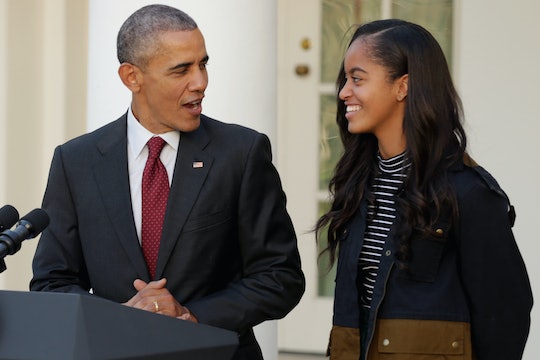 After The White House, Malia Obama Seems To Be Enjoying College Life

Keeping up with the Obamas hasn't been an easy task since the family left the White House in early 2017. Barack and Michelle are looking to the next chapter of their lives, and their daughters are officially all grown up. With Sasha Obama going to prom (and those pictures getting all of the delightful viral attention they deserve, because our girl was slaying) some people may be wondering: what is Malia Obama up to now? As it turns out, she's left for college, and the family's new Netflix documentary might provide some much-desired insight into her new life.

In September of last year, Malia had officially enrolled at Harvard University, after taking a year off to herself. Vanity Fair reported that her time as a college student is so far shaping up to be just as picturesque as any of us could have imagined: she reportedly has a boyfriend, she's deciding what she wants to study, and already made a dancing cameo in a student band, according to TMZ.

However, she's an Obama, which means that all of the fun is inevitably going to be balanced out with some serious achievement on the horizon. The New York Times reported that given the fact that both of her parents attended Harvard Law School, some predict that Malia will follow in their footsteps, though it's all speculation at this point.

In August 2017, the Chicago Tribune reported that Malia was about to wrap up her gap year, which she took before starting school at Harvard. However, she didn't spend those months doing nothing, of course. Newsweek reported that she had actually accepted an internship with the Weinstein Co., (yes, that Weinstein) and that she had started working with the company in New York City after she left high school.

She was reportedly tasked with "reading through scripts and deciding which ones to move onto Weinstein brass," according to Newsweek, and that she was a part of the production and development department. All of this was happening months prior to the ousting of his alleged sexual misconduct.

Now, what we know is that Malia seems to be thriving at Harvard, and it's yet to be seen whether she'll be taking another role in the entertainment industry, moving onto law practice, or even politics.

What we do know is that Malia's privacy is being strictly preserved, and she's off social media for that reason. Refinery 29 reported that though her secret Facebook page was making the rounds for its political statements (she's anti-Trump, reportedly) friends like Chelsea Clinton came to her defense saying that because she is now a "private citizen," no part of her life "should be anyone's clickbait."

Be that as it is, W recently reported that the Obamas as a family have been adjusting well back into a more normal life, out of the rigorous spotlight of politics. Between enjoying ordinary outings, proms, and even the excitement of milestones like college and new relationships, it's only fair and just to give Malia and her sister Sasha the time and space they deserve to mature and come into their own.

The truth is that though everyone is excited to see one of the first daughters grow up so well, she still deserves time and space like everyone else, and it seems that most people are intent are giving her just that.