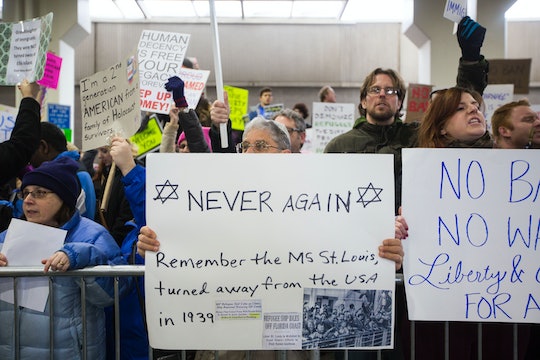 What You Should Know About Martial Law

President Trump has been in office for less than two weeks and he has already signed 13 executive orders. It's been a busy week for the president, as well as an unsettling start to the next four years for many American citizens. It's not only Trump's executive orders that have people worried about the future of our country either: Trump took to Twitter last week, sharing statistics from The Chicago Tribune which detailed the rise in homicides happening in the city. “If Chicago doesn’t fix the horrible ‘carnage’ going on, 228 shootings in 2017 with 42 killings (up 24% from 2016), I will send in the Feds!” Trump declared, which has many people wondering if the President is seriously considering implementing martial law in the United States.

The Merriam-Webster dictionary defines martial law as "the law applied in occupied territory by the military authority of the occupying power," or as the law "administered by military forces that is invoked by a government in an emergency when the civilian law enforcement agencies are unable to maintain public order and safety." While the threat of martial law is scary, especially considering it's often connected with the suspension of civil laws and rights, the United States does have systems in place that help prevent a President from authorizing martial law — so whether or not that actually happens, it's still unsurprisingly concerning to those who've lived through actual martial law.

Martial law is limited in the United States because of the Posse Comitatus Act, which was passed by Congress in 1878. The act states that congress must approve of all military involvement in domestic law enforcement. Habeas corpus in another element of United States law that helps prevent martial law from going into effect. Habeas corpus is the right of civilian to report an unlawful detention or imprisonment before a court, which basically means that the United States judiciary is able to supervise law enforcement. According to Article 1, Section 9 of the United States Constitution, "The Privilege of the Writ of Habeus Corpus shall not be suspended, unless when in Cases of Rebellion or Invasion the public safety may require it."

Trump's tweet about Chicago's crime rates didn't come right out and say martial law, however, the implication was clear for many. Aaron Morrison, a senior staff writer at Mic, pointed out that martial law has been proven to lead to "higher rates of death, incarceration and civil liberties violations." He spoke with native Chicagoan and criminal justice professor Nicole Gonzalez Van Cleve about the possibility of martial law being implemented in Chicago. "When you take the history of his rhetoric and his campaign promises, this martial law approach presents a different twist," Van Cleve told Mic. "There is no violence-prevention expert in America that would agree that martial law works."

Most recently, concerns over martial law have come to a head following the various immigration ban protests taking place across the country. "Now what?" one journalist wrote on Twitter Sunday, responding to reports that attorneys looking to assist detained refugees using a federal judge's executive order stay had been denied by Customs and Border Patrol (CBP) agents. "If judge grants contempt order [against CBP agents] & sends Federal Marshals against CBP, & [the White House] sides w/CBP in defiance — who or what defends [the] Constitution?"

"If we're following a pattern here Trump is telling us he's about to start WWIII," one writer tweeted.

"Unbelievable that CBP are openly defying federal court order," echoed one Twitter user. "This is what beginnings of martial law looks like."

It will be interesting to see how Trump moves forward from here. Despite using Twitter to threaten martial law, there are systems in place that will hopefully prevent our president from doing just that — whether those systems are fail-proof is still up in the air.